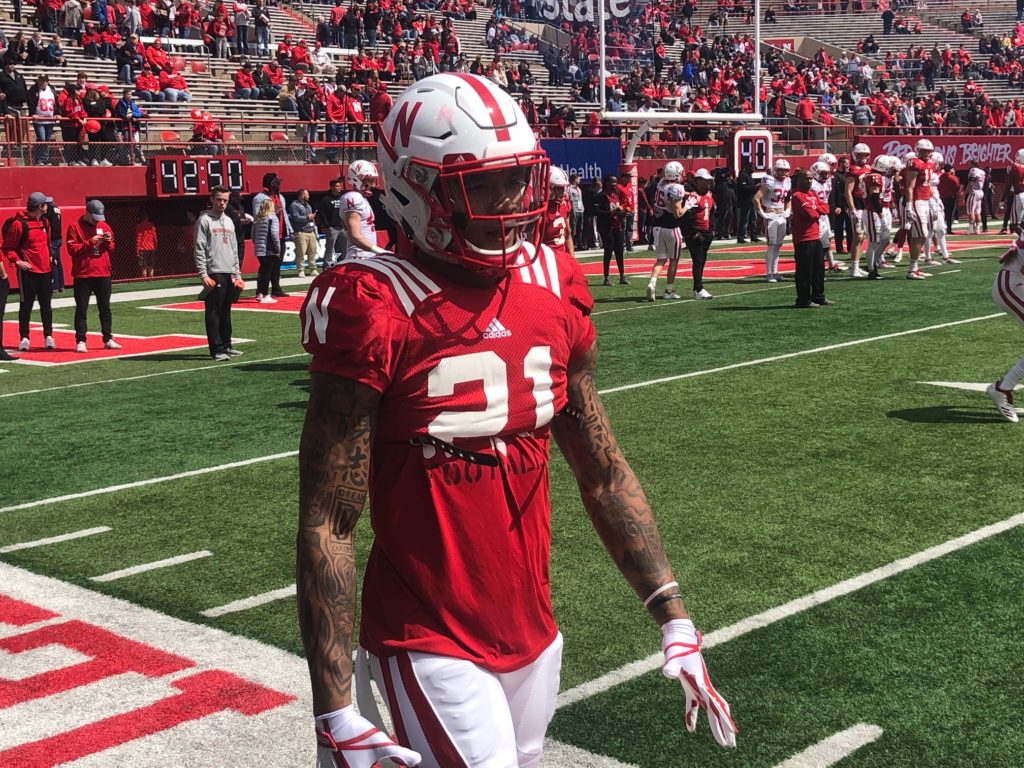 KRVN Photo-Evan Jones: Senior defensive back Lamar Jackson looks to have a big impact on the Huskers statistically and as a leader.

It has been a series of ups and downs for Lamar Jackson since he stepped foot onto the campus of the University of Nebraska Lincoln in 2016. We have seen highs and lows, and through all of that, it looks like Jackson is ready to be the leader Nebraska needs on and off the field.

Out of Elk Grove, California Jackson was a 4-star recruit who was listed as a safety. His 6’3 205-pound frame was one to marvel at. He played on both of the ball sides during high school, at quarterback registering 544 yards passing with four touchdowns and 644 yards rushing and nine touchdowns and defensive back with 28 tackles and a pass break up. It was clear that teams avoided throwing his direction with such a low number of tackles and deflection. When he arrived in Lincoln, Jackson was moved to the cornerback position and with his size, stature, and athleticism it seemed like the perfect fit. But during his true freshman season, there were growing pains.

It started with the first game of the season against Fresno State in 2016. Jackson, the true freshman, was picked on heavily in that game which was no surprise. For the remainder of the season, Jackson saw time on the field but his final numbers were 17 tackles and zero passes defended. The main thing for Jackson was though, he learned from two secondary members that had nice careers at NU, Josh Kalu and Chris Jones and the Huskers went 9-4.

In his sophomore season, he seemed to be finding his way a little starting in all of the games and recording 38 tackles and three defended passes in the Huskers 4-8 season.

Following that sophomore season, Husker fans expected to see an NFL talent at the cornerback spot in Jackson. The numbers were solid at 28 tackles, two interceptions, and a career-high seven pass breakups. He started 11 of the 12 games, and that one game he didn’t start was because of some friction between the coaching staff and Jackson.

On September 29th, 2018 in Nebraska’s loss to Purdue, 42-28, Lamar Jackson was benched for the remainder of the game for trash talking to the Purdue sideline. It was clear that the coaching staff was upset. The next day Jackson knocked on the door of Head Coach Scott Frost and asked, “What’s the problem?” The entire coaching staff said to Jackson in the discussion that they expect him to be a pro so he needed to act like a pro.

The adversity that Jackson has dealt with throughout his career at Nebraska has him poised for a big senior season. Also to be a leader, not just on the field but off the field as well.

Looking at the current secondary, the only other Huskers with extensive defensive playing time are senior Eric Lee Jr. and junior Dicaprio Bootle. Others with some experience include junior Deontai Williams, Maquel Dismuke, and sophomore Cam Taylor.

The last player mentioned amongst the group of players with experience, Cam Taylor has looked upon Lamar for guidance in his time as a Husker. Jackson has been through a lot during his time at NU. So it’s not surprising that he is becoming a solid leader. Taylor says that he is leading both vocally and by example.

Taylor also mentioned that Jackson didn’t always have the best reputation from others, but he says that Jackson has matured on and off the field.

Taylor says that the first impressions mean a lot to him. As you previously heard he refers to Lamar as a brother to him. He says it’s a little different how close they are based on what he had heard.

It’s evident that Jackson has become a leader. To have a young vocal athlete like Cam Taylor have glowing remarks about Jackson shows that he has grown into the role of being the leader of the defensive back group. If Jackson can use the experiences he’s had, the leadership he’s provided as of late, and the talent and tools he’s been given, we may be talking about Lamar Jackson the NFL defensive back at this time next year.