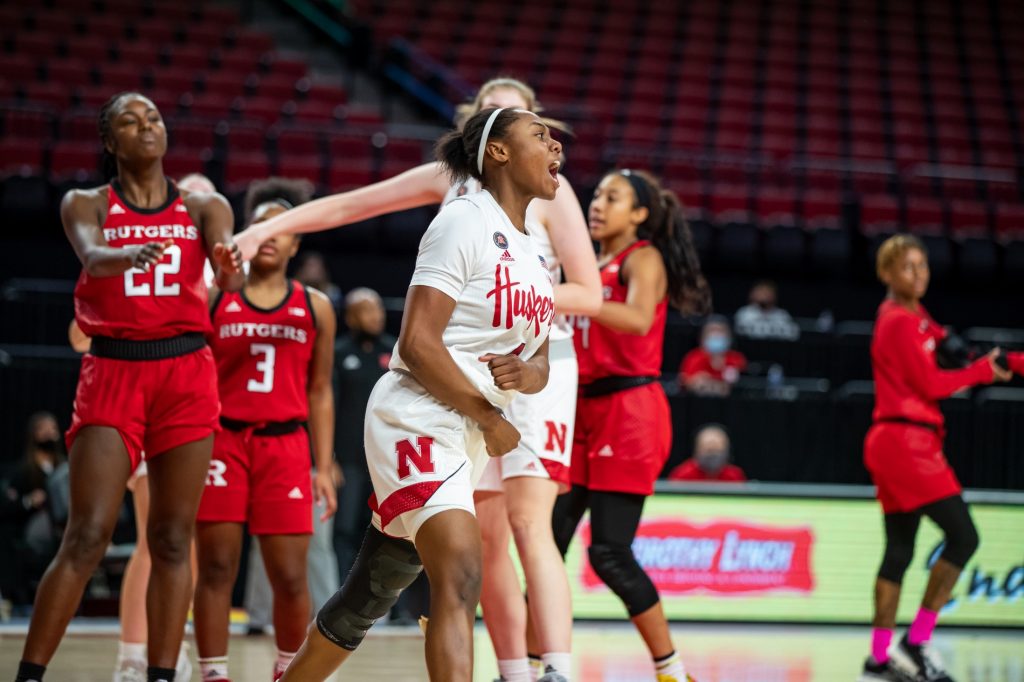 Lincoln – In a game that has become the norm in the brief history of the Nebraska vs. Rutgers women’s basketball series, the Huskers outlasted the Scarlet Knights, 53-50, in a defensive dogfight at Pinnacle Bank Arena on Sunday afternoon.

Sam Haiby scored a team-high 16 points to go along with five rebounds and five assists, including six straight points midway through the fourth quarter that turned a 44-43 Nebraska deficit into a 49-44 lead. Fellow Husker captain Isabelle Bourne added her second consecutive double-double with 11 points and a career-high 12 rebounds to go along with three assists to help the Huskers improve to 5-3 overall and 3-2 in the Big Ten. Rutgers slipped to 5-3 overall and 1-3 in the Big Ten.

While Bourne was strong on the offensive end, it was her primary responsibility for most of the game to slow down Rutgers scoring star Arella Guirantes, who entered the game as the Big Ten’s leading scorer at nearly 25 points per game. Just days after Guirantes went off for 34 points against Iowa, Bourne led Nebraska’s team defensive effort in holding Guirantes to just eight points on 3-for-24 shooting.

Nebraska’s defense held Rutgers, which entered the game averaging nearly 86 points per contest, to just 23 points in the first half and just 29 points through the first 26 minutes of the game. The Huskers led 24-23 at the half, before Guirantes hit a field goal to put the Scarlet Knights up 27-24 early in the third. The Big Red then held Rutgers without a field goal for more than four minutes. A three-point play from Haiby, back-to-back three-pointers by Ashley Scoggin and another three-pointer from Whitney Brown capped a 12-2 surge that gave the Huskers the biggest lead of the game for either team at 38-29 with 4:09 left in the third.

Although Nebraska’s lead grew to nine with four minutes left in the third, Rutgers answered with an 11-1 surge to close the quarter and take a 40-39 lead to the fourth period.

Rutgers extended the lead to 44-40 on a Diamond Johnson bucket, before Scoggin drained her third three-pointer of the game to set up the six straight points from Haiby that capped a 9-0 Big Red run that fueled the victory. Scoggin finished the game with 11 points, including three three-pointers and two free throws with 12.3 seconds left that sealed Nebraska’s 53-50 win.

Johnson, a freshman point guard, led all scorers with 19 points on 8-of-16 shooting, while adding six rebounds and two assists. Tekia Mack who scored four points late in the game to help Rutgers pull within 51-50 in the closing minute, added 13 points, seven rebounds and three steals for the Scarlet Knights.

In addition to the big rebounding and defensive game from Bourne, the Huskers got 13 boards from Bella Cravens, who added six points, a block and a steal. Kate Cain added seven rebounds to go along with four points and a pair of blocks, as Nebraska won the team rebounding battle, 47-34.

Nebraska returns to Big Ten road action this week by traveling to No. 16 Michigan on Thursday, Jan. 7, before squaring off with No. 25 Michigan State on Sunday, Jan. 10.