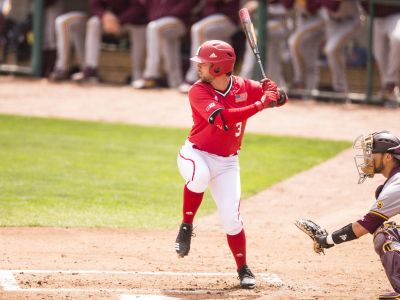 Senior right-handed pitcher Reece Eddins earned his team-high sixth win of the season as he went 6.0 innings and allowed three runs, while recording three strikeouts. Mike Waldron came on for 1.2 innings of relief before Shay Schanaman tossed the final 1.1 innings to earn his third save of the season.

Senior Alex Henwood produced a career-high three hits, which included a home run and a double. Angelo Altavilla and Aaron Palensky also tallied multi-hit efforts as each of them had two hits.

Tied 3-3, the two teams played a scoreless third inning and fourth inning before NU plated four runs in the bottom of the fifth. Spencer Schwellenbach was hit-by-pitch in the leadoff spot and then advanced to third with Henwood’s one-out double. Schwellenbach scored on a wild pitch. Colby Gomes drew a walk to put two runners on before Jaxon Hallmark annihilated a three-run home run to left field.

NU responded in the bottom of the eighth with one run. Palensky hit a leadoff single before stealing second. Altavilla laced an RBI double to bring in Palensky and give the Huskers an insurance run.

The Huskers conclude their regular season next week when they host Michigan at Hawks Field for a three-game series, Thursday through Saturday. Thursday’s series opener is set for 7:30 p.m. (CT). All three games will be televised on the Big Ten Network.