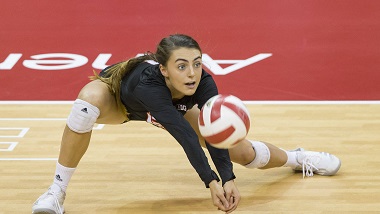 Playing at home for the first time in 17 days, the Huskers won a thrilling opening set before heading into the intermission tied 1-1. Illinois made key plays down the stretch in both sets three and four to earn its first win over the Huskers since 2014. Nebraska dropped to 16-6 overall and 7-5 in the Big Ten. The Fighting Illini improved to 20-3 overall and 9-3 in the Big Ten.

Mikaela Foecke paced the Huskers with 17 kills and added 14 digs. Lauren Stivrins had nine kills and five blocks, and Jazz Sweet had five kills and three blocks. Callie Schwarzenbach led the Big Red in blocks with seven to go with four kills.

The Huskers had an edge in aces with eight to Illinois’ five. Hames had four aces, a career high. Sun had two. But Illinois had 61 kills compared to the Huskers’ 50, and the Big Red committed six more attacking errors.

Nebraska celebrated the “Weekend of Champions” at intermission, recognizing the 1998 and 2008 Big 12 champion and NCAA semifinalist teams.

Set 1: Hames opened the match with an ace, and the Huskers claimed a 5-3 lead after an ace by Maloney. Stivrins smashed an overpass to increase the lead to 7-4, but the Illini came back and tied the set at 7-7. A block by Hames and Stivrins sparked a 5-1 Husker run that put them up 12-8. Stivrins and Sun had kills, and Sun combined with Schwarzenbach for a block during that stretch. Illinois wouldn’t go away though, scoring three straight to tie the score at 14-14. After a string of sideouts, Nebraska got a kill by Schwarzenbach and an Illinois hitting error to go up 21-19. But a Husker hitting error and a kill by Quade had the set knotted once again, this time at 21-21. Illinois then went ahead 22-21 after a block by Bastianelli and Poulter, but Foecke and Schwarzenbach came right back with a block of their own, and the Huskers won a long rally after an Illini hitting error to go up 23-22. Stivrins won a joust at the net to earn set point for the Huskers, but Illinois got a kill from Quade and an ace from Poulter to tie the score at 24-24. Stivrins terminated three times and Schwarzenbach also had a kill to give NU four more set point chances before a block by Schwarzenbach and Sweet finally ended it at 29-27.

Set 2: The Huskers got out to a 4-1 lead, but Illinois tied the set by 5-5. A kill by Sun and a pair of Illinois hitting errors gave NU an 8-6 lead, but Illinois bounced back with back-to-back blocks to key a 5-0 run that put the Illini in front, 11-8. Illinois built the lead to five, 17-12, after an ace serve capped a 3-0 spurt, and Illinois eventually increased its lead to seven at 21-14. Hames served back-to-back aces and Sun connected on a kill to pull the Big Red within 21-18 after a 4-0 run, but Illinois held off the Husker comeback attempt and evened the match with a 25-19 win.

Set 3: Nebraska fell behind 4-1 before Sun brought the Huskers back to a 4-4 tie with back-to-back aces after a kill by Sweet. Illinois ran off a 4-0 spurt to take a 9-6 lead, but after a timeout the Huskers rallied back to take a 12-10 lead with a 5-0 run, keyed by two kills and an ace from Foecke and two kills by Sun. Later, two more kills by Sun put the Big Red up 14-11 to make it a 7-1 run. The Huskers led 17-14 when Illinois charged back with a 7-1 run to go ahead 21-18. Stivrins and Sun swung the Huskers back within one, 22-21, and another kill by Sun leveled the set at 23-23 before Hames served her fourth ace of the match to grab set point for the Huskers at 24-23. But Illinois fought off two Husker set points and went on to win the set, 27-25, scoring the final two points on kills by Quade.

Set 4: The Huskers bounced back from the disappointing end to set three by taking an 8-3 lead in set four with Schwarzenbach combining on back-to-back blocks. But Illinois roared back and took a 14-11 lead after a 7-0 run. Back-to-back kills by Stivrins closed the gap to 17-16, and NU tied the set at 18-18 after a kill by Foecke and a block by Sun and Stivrins. The Illini went back ahead 22-19 after a couple of Husker hitting errors and a kill by Prince. Sun got sideout for the Huskers and Illinois hit wide before a block by Sweet and Schwarzenbach tied the score at 22-22. The Huskers committed a service error to give Illinois a 23-22 lead, and two Illini blocks gave them the 25-22 win.

Up Next: Nebraska hosts No. 4 Penn State next Friday at 7 p.m. The Huskers will turn around and play Rutgers on Saturday night at 7 p.m. at the Devaney Center.