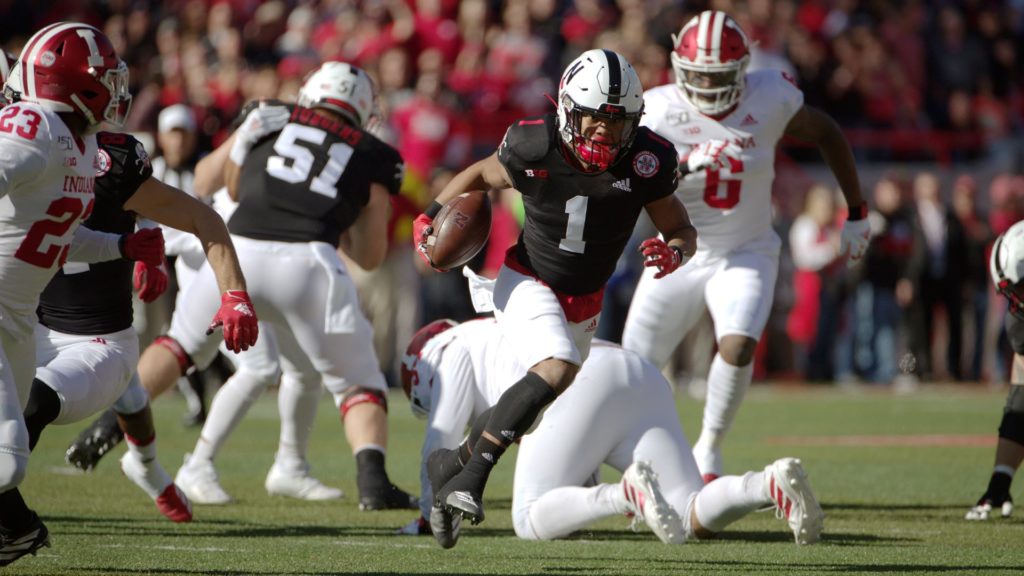 Lincoln – Reserve quarterbacks Noah Vedral and Luke McCaffrey split time on the field and moved Nebraska for well over 500 yards of total offense, but a pair of costly turnovers were the difference in the Huskers’ 38-31 loss to Indiana at Memorial Stadium on Saturday afternoon.

The Huskers, who slipped to 4-4 overall and 2-3 in the Big Ten, piled up 514 total yards, including 294 passing and 220 rushing. Vedral started the game and helped the Huskers jump to a 14-3 lead midway through the first quarter and took a 14-9 edge to the second. In roughly two quarters, Vedral completed 14-of-16 passes for 201 yards and added seven carries for 21 yards and two touchdown runs to account for 222 total yards. He also caught a 22-yard pass from JD Spielman. McCaffrey, a true freshman, completed 5-of-6 passes for 71 yards and a touchdown, while adding 12 carries for 76 yards to account for 147 total yards.

Indiana became bowl eligible by improving to 6-2 overall and 3-2 in the Big Ten behind the quarterback play of Peyton Ramsey, who completed 27-of-40 passes for 351 yards and two touchdowns. He added nine carries for 42 yards and another score to account for 393 yards of total offense. Ramsey, who completed 14 passes for 178 yards to receiver Whop Philyor, helped the Hoosiers to 455 yards of total offense.

Nebraska true freshman Wan’Dale Robinson also had a big day for the Big Red with 22 carries for 83 yards and a touchdown, while adding a team-high six receptions for 71 yards. Spielman pitched in five receptions for 97 yards.

Nebraska was in position to extend its lead on its first drive of the second quarter, before Vedral fumbled on 3rd and 3 at the Indiana 19. The ball was scooped up by Hoosier defensive end Allen Stallings IV who appeared headed for runaway touchdown. However, Vedral got up and chased down Stallings from behind after a 68-yard return and stopped him at the NU 8. Although Vedral prevented the scoop and score, Indiana capitalized on the next play with Ramsey’s eight-yard touchdown pass to Ty Fryfogle with 12:19 left in the half to give the Hoosiers a 16-14 lead.

The defenses finally slowed the offenses for the next 10 minutes. Vedral was injured on his eight-yard run to open a Husker drive from its own 3 with 5:25 left in the half. The hit by James Miller knocked the ball loose and knocked Vedral out until Nebraska’s final drive of the fourth quarter. Dedrick Mills recovered the fumble, and McCaffrey entered the game but was unable to get the Huskers a first down.

Indiana started its ensuing drive near midfield and moved quickly to the Nebraska 27. But on 2nd and 4, Ramsey’s short pass was bobbled and grabbed out of the air by Husker defensive end Alex Davis with 1:52 left. The interception not only stopped a potential scoring drive by the Hoosiers, McCaffrey and the Huskers turned the mistake into points.

Nebraska marched 74 yards in six plays capped by McCaffrey’s 24-yard touchdown strike to Kanawai Noa with 39 seconds left in the half. It was McCaffrey’s first career touchdown pass, and it sent Nebraska to the locker room with a 21-16 lead. McCaffrey was 2-for-2 for 46 yards on the drive and added a 12-yard run.

Indiana took a 24-21 lead midway through the third quarter on a one-yard touchdown run by David Ellis that was followed by a two-point conversion pass from Ramsey to Peyton Hendershot with 7:30 left.

McCaffrey was able to provide the Huskers with another answer by driving Nebraska 63 yards in 13 plays before the drive stalled, and Barret Pickering booted a 30-yard field goal to tie the game at 24 with 2:53 left in the third quarter.

The Hoosiers provided the final score of the period with Ramsey’s two-yard touchdown pass to Matt Bjorson as time expired to send Nebraska to the final quarter trailing 31-24.

McCaffrey and the offense moved quickly on the ensuing drive, and he hit Noa across midfield for a first down on the second play of the drive. Noa made a move to elude a defender but was hit hard from behind knocking the ball loose. Indiana recovered at the Nebraska 43, and seven plays later Indiana scored on a nine-yard run by Stevie Scott III to give the Hoosiers a 38-24 lead with 12:08 left.

Indiana began to celebrate, but on the first play of Nebraska’s drive, McCaffrey completed a short pass to Robinson who was thrown down hard well out of bounds for a 15-yard penalty. On the same play, Indiana roughed McCaffrey after the throw to give Nebraska another 15 yards and move the Big Red across midfield. Five plays later, Robinson coasted into the end zone from four yards out on a short scoring run to pull the Huskers back within 38-31 with 10:21 left.

The Blackshirts got a stop and Nebraska got the ball back with well over six minutes left in the game and all three timeouts, but were 93 yards from paydirt to start the drive. McCaffrey also stayed on the sideline after suffering a minor injury, and Vedral returned for the first time since the second quarter. Vedral marched the Husker offense again, but on 4th and 5 at the Indiana 34 his pass to Jack Stoll was incomplete with 3:23 left.

Nebraska still had all three timeouts, but Indiana was able to string together three first downs to run out the clock and record their first win in Lincoln in its first trip to Memorial Stadium since the Huskers joined the Big Ten in 2011.

Nebraska returns to Big Ten road action next week to take on Purdue. Kick-off between the Big Red and the Boilermakers is set for 11 a.m. with national television coverage on FOX.