How It Happened
After one quarter of action, Iowa State held a 15-14 advantage over Texas. Jade Thurmon (five) and Joens (seven) combined for 12 of Iowa State’s 15 points in the first quarter. The Cyclone defense was great in the first quarter, holding the Longhorns to just 28% shooting from the field for the period.

Out of the first break, Texas cut Iowa State’s lead to just one. From there, ISU made a 12-2 run over a seven minute stretch, in which it held the Longhorns without a made bucket from the field. Despite hitting just 1-7 from three to begin the game, Iowa State countered their woes from deep by outscoring Texas 16-8 in the paint. At the half, the Cyclones led the Longhorns 30-21.

The Cyclones buried the Longhorns in the third quarter. Iowa State was efficient from the floor, connecting on 5-8 attempts, while staying solid on defense, with Texas going 6-21 from the field. ISU’s work from the free throw line was a big difference in its 50-34 third-quarter lead, hitting on 9-11 third-quarter attempts.

On the night, Iowa State forced 19 Texas turnovers. The Cardinal and Gold’s defensive effort was tremendous. UT shot just 21-78 from the field and 5-31 from three in ISU’s win in Austin.

Players of Note
Ashley Joens led all scorers in the contest. The sophomore poured in 23 points in the game. She was solid from the charity stripe, cashing in on 9-11 attempts from the free throw line. She pulled down eight rebounds and dished out two assists.

Up Next
Iowa State will remain on the road this weekend. The Cyclones are set to face TCU on Sunday afternoon at noon. 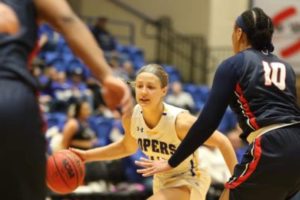