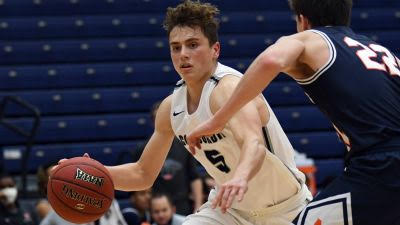 CRETE, Neb. – A layoff for the Thanksgiving holiday did little to slow the roll of the Concordia University Men’s Basketball team. While continuing to execute pleasing-to-the-eye team basketball, the Bulldogs won handily over host Doane, 83-66, in Crete, Neb., in Monday (Nov. 30) evening’s makeup clash. Twenty-one of Concordia’s 31 field goals were assisted in fueling the team’s field goal percentage of 53.4.

Head Coach Ben Limback’s squad remains white hot having won seven games in a row to improve to 7-1 overall (4-0 GPAC). Dating back to last season, the Bulldogs have won 11-consecutive matchups over conference foes. They have started 4-0 in GPAC play for the first time since the 2008-09 season.

“Any win on the road in the GPAC is a big deal,” Limback said. “I’m really proud of our mindset. I thought we played hungry and with an edge today. Give Doane a lot of credit. They fight you tooth and nail and they change defenses and pressure the ball well. I thought we had a good rhythm throughout the game.”

Concordia had not shot well in recent trips to the black top in Crete. That was not the case on this particular night when the Bulldogs shared the ball nicely, allowing for four double-figure scorers. While playing in his hometown, Carter Kent was in total control. He piled up 17 points, dished out eight assists and grabbed five rebounds. Just when Doane found a bit of momentum late in the ballgame, Kent dashed the hopes of the Tigers with a three-ball.

The Bulldogs continue to enjoy an advantage on the boards (34-29 on Monday), thanks in a big way to the hard work of Gage Smith. Smith (18 points, 10 rebounds) posted his fifth double-double already this season. The always reliable Justin Wiersema (12) and Klay Uher (10) also reached double digits in the scoring column. Another Crete native, Uher made all five of his shot attempts from the floor.

“Carter had a great night,” Limback said. “It was fun to see him break out with eight assists. I thought he played a great second half and hit some big shots for us. Klay Uher off the bench played some great defense. He’s one of those guys who just plays his role.”

Limback seems to have a team full of players who are comfortable in their roles. Grant Wragge provided a personal 5-0 run off the bench as part of a team 10-0 spurt that pushed the lead to 23 (62-49) midway through the second half. Wragge and Ryan Holt finished with seven points apiece while AJ Watson added six. Concordia went 11-for-29 (.379) from 3-point range and committed only 10 turnovers.

On the other end, Doane (3-5, 0-3 GPAC) shot 45.2 percent (28-for-62) from the floor. The Tigers continue to get the lion’s share of their offensive production from Anthony Laravie, who wound up with a game high 22 points on 9-for-21 shooting from the field. However, Doane was dominated in the lane (40-20 in points in the paint). Laravie and company have dropped three GPAC games in a six-day span since returning from a COVID-induced break.

Outsiders are beginning to take notice of the Bulldogs, who were off the national radar in the preseason. The NAIA Hoops Report ranked Concordia at No. 23 in the NAIA in its poll (not associated with the official NAIA coaches’ poll).

A week on the road in the GPAC will resume on Wednesday with a short trip west to Hastings (3-4, 0-3 GPAC). Tipoff from Lynn Farrell Arena is set for 8 p.m. CT. Only fans whose names appear on a pre-submitted list will be admitted entry into the game. The Bulldogs have won nine-straight series meetings over the Broncos.