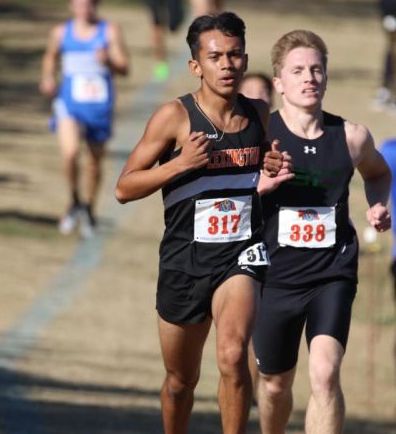 For a 3rd straight year the Lexington Minutemen finished as the Class B State runner up at the NSAA state cross meet in Kearney on Friday. Lexington was second to Omaha Skutt in the team standings. The Minutemen were lead by Yanni Vasquez who ran one of his best races ever and set a new personal best on that course in a time of 16:37 and earning 4th. According to coach Sam Yilka, Yanni ran a very strong finish and passed several on the last 500 meters of his race.” Since mid season, he began to take shape as a mature runner and earn great opportunities and showcase his talent.”

Another senior ending his career was Cyrus Rhea who ran a 16:53 and placed 10th (medalist). “Cyrus had a tremendously successful season and continued to improve through his discipline and hard work.” According to Jilka.  Elmer Sotelo set a PR by over 1 minute 30 sec and ran third for the Minutemen. He was very driven in the second half of his race to place 23 rd and run a 17:22 shattering his PR and best run ever. Teammate Sean Worthman backed him up as our fourth runner placing 26th in a time of 17:25 and a new personal best. Ending his senior career was Alexis Hernandez, running 5th on the team and placing 30th in a time of 17:30. Garrett Converse rounded out the team, placing 53rd in a new personal best on that course, breaking 18 min in a time of 17:58.

The Lexington Girls placed 4th in the Class B team standings. Coach Jilka had this to say about the Minutemaids. “I was proud of how the girls came together during the season and ran strong together and being willing to work to achieve and not give up or quit.” Kennadi Ureste and Kayla Barrios ran very well to medal and set personal bests for that course. Marissa Garcia, also gaining experience as a freshman, helped with team efforts in running 21:58 (44 th ) in order to set her personal best on the course. Senior Jessica Virgilio stepped up to run as our fourth running placing 59th and completing her third state race in her career. Sabrina Converse, another senior, ended her career with a 66th place run in a time of 22:47 taking seconds of her personal best on that course. The sixth runner, Janet Aguado set her personal best on the course with a 23:29 and 75th place.