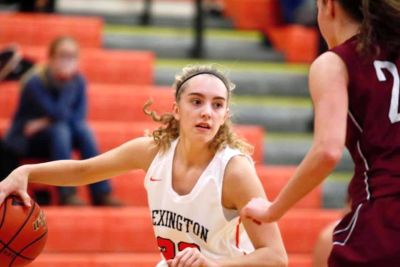 Lexington-It was a clean sweep for the Lexington basketball teams on Thursday night to open up the season against Gothenburg. In the girls game, the Minutemaids built a big lead and held on for a 48-42 win. Lexington jumped out to a 14-2 lead at the end of the first, Gothenburg however would fight back and get as close as 28-27 in the third quarter. In the fourth, Lexington’s Kalli Sutton scored all nine of her points including going 4-4 from the line as the Minutemaids pulled off the win. Lexington was led by Sarah Treffer who scored 19. Gothenburg was paced by Marly Kennicutt who scored 11, while Annica Harm had nine.

In the boys game, Lexington battled back to win it 45-39 in overtime. The Minutemen led by six going into the fourth quarter only to see Gothenburg grab a 36-31 lead late in the game. Jase Carpenter tied the game for Lexington with a three to force overtime and Lexington outplayed the Swedes in OT. Austin Friedricksen led Lexington with 10 points, Carpenter had eight will all of his points coming in the fourth. Wes Geiken scored 13 for the Swedes and Bronson Long chipped in with 10.  Lexington is on the road Friday night at Ogallala, while the Swedes will host Hershey.

Edwards Named to Player of the Year Watch List