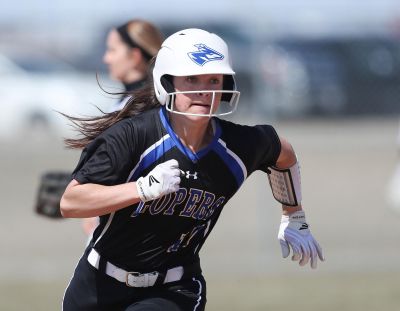 Kearney, Neb. – Nebraska-Kearney right fielder Carlee Liesch has been named the 2019 MIAA Freshman of the Year and is one of six Lopers named to the all-conference team. The squad, voted upon by the MIAA’s 14 head coaches, was announced today; coaches cannot vote for their own players.

Liesch was one of the top freshmen in Division II this spring, batting .458 with 12 doubles, three triples, seven homers and 18 RBI’s. Batting leadoff in 32 games, she scored a team-best 51 runs while fielding at a .978 clip. Finally, her 71 hits are fourth most in school history for a single season with her batting average the second highest.

Starting 19 games at catcher, 16 at designated player and one in left field, Howe finished her final collegiate season at .367 with six doubles, four homers and 39 RBI’s. Headed to Nursing School in the fall, Howe ranked second on UNK in RBI’s and sac hits (six) while tying for the team lead in fielding percentage (.990).

Batting right behind Howe in the cleanup spot was Hamilton. The only Loper appear in all 44 games, she batted .391 with 10 doubles, 10 homers and a team-best 46 RBI’s. Also leading UNK in homers Hamilton was second on the team in hits (54), total bases (94) and slugging percentage (.681). In the field she had 57 assists and 37 putouts with her career batting average of .380 ranking seventh highest in school history.

In the circle, Handrahan won eight games and saved another. Over 29 appearances and 18 starts, she tied for the team lead in wins while fanning a team-best 76 in a team-high 103.1 innings. Next, Sempek batted .380 with six doubles and 18 RBI’s with Ray coming in at .341 with four doubles, two triples and 14 RBI’s. Sempek also had a team-best 278 putouts with Ray having a team-best seven sac bunts.