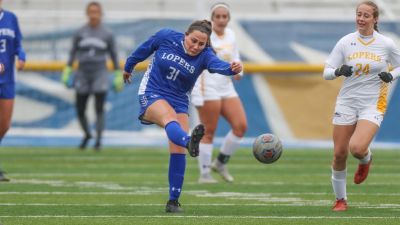 This was the showcase intrasquad scrimmage for the Lopers this fall. UNK has been practicing since early September and will continue to do so until early November. Today’s game, consisting of two 35-minute halves, allowed 24 players to take to the pitch.

“It was great to get back on the field and play somewhat of a game,” UNK head coach Chloe Roberts said. “This was a good way to see how we’re looking and where we’re at.”

True freshman keeper Emery Mounce (Spring Hill, Kan.) made some nifty saves in the early going to help the Gold team keep things scoreless. However, Dayton (Olathe, Kan.) found sophomore midfielder Cammie Davis lose in the box in the 26th minute. Davis navigated to the left side and promptly found the back of the net. Early in the second half sophomore midfielder Ariella Mesa (Olathe, Kan) took a pass from Dayton and tallied a goal from the right side of the box. Overall the Blue out shot the Gold by a 13-4 margin.

“This scrimmage was a chance to get the freshmen involved and start playing the system we want to in a proper game,” Roberts said. “There’s only so much you can do in practice.”

Sophomore defender Raegan Downham (Cheyenne, Wyo.) finished the scoring when she tallied rebound goal in the 53rd minute. Mounce reached high to stop a shot but the loose ball went to Downham right near the goal line.

“There was a lot of positives today. Scoring three goals on one end really helps,” Roberts said. “There was good things on both sides and things we can work on over the next few weeks.”

A 2021 Spring season is slated to get underway at the end of March.