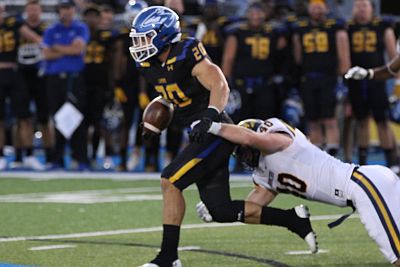 Kearney, Neb. –The Nebraska-Kearney football team received three votes in this week’s American Football Coaches Association (AFCA) Division II Top 25 poll. That ranks the Lopers (5-2) 37th in the nation and marks the first time the program has received votes in this poll since it began 2012 ranked 28th. UNK is coming off a 24-17 home win over then-No. 7 Northwest Missouri State on Saturday.

It marked the Lopers first win over the six-time national champions in 29 years. Things don’t get easier the next three weeks as Kearney is at No. 29 Fort Hays State (5-2) on Saturday, hosts No. 14 Central Missouri (7-0) on November 2 and then travels to No. 30 Missouri Western State (5-2) on November 9. Saturday’s game at the rival FHSU Tigers is set for 2 p.m. This will be the 65th all-time meeting between the two with Hays ahead in the series, 34-29-1.