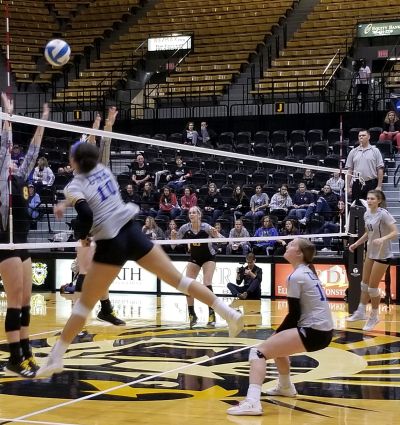 Kearney, Neb. – The second-ranked Nebraska-Kearney volleyball team hit .385 and junior right side MK Wolfe recorded her 1,000th career dig as the Lopers swept Fort Hays State (-12, -12, -17) Tuesday night in Kansas. This was the Lopers (27-0, 17) fifth consecutive Tuesday match and its 93rd all-time win against long-time rival FHSU. UNK has a change in schedule this week, having no Friday match but a tilt with Missouri Western State on Saturday night. While the Tigers (6-19, 3-14) have struggled this fall they also had been playing well of late, dropping a five setter to No. 14 Northwest Missouri State last Saturday and taking a set from No. 9 Central Missouri a day earlier.

However, there was no repeat of those performances tonight as some tough serving and solid defense by the Lopers shackled the Tigers to the tune of a .061 hitting efficiency and 15 unforced errors. “They certainly had our attention going four and five sets over the weekend with two nationally-ranked opponents. This can be a tough place to play and we’ve had a few close ones down here in recent years including last fall,” UNK head coach Rick Squiers told KRVN’s Jayson Jorgensen. “To get off to a good early start, play clean and not error was important.” Trailing only a couple of times all night UNK used a 16-3 run in the first set to break a 4-4 tie. This dominating stretch featured eight Loper kills, six unforced attack errors by the Tigers and solid serving from Wolfe (Omaha Marian), senior outside Julianne Jackson (Bonner Springs, Kan.), sophomore libero Lindsay Nottlemann (Lincoln Pius) and junior setter Maddie Squiers (Kearney Catholic). The 32nd Loper to reach four figures in career digs, Wolfe came into the night sitting with 998 and reached the milestone early in the opening set. The dig led to a kill by Bennington freshman middle Michaela Bartels and a 6-4 UNK lead. Wolfe (1,009) and her sister Annie (1,214) are the first sister duo on UNK’s all-time digs list; Kim (1,034) and Kelli (1,084) Brummer both reached 1,000 kills in their respective Kearney careers.

Hitting well over .400 until three late errors in the third, the Loper offense was paced by Gretna freshman outside Kamryn Schuler who had a team-high 12 kills in 29 swings (.310 pct.). She was coming off a nine kill effort in Saturday’s win over UCM. “When you have a couple of freshmen (Schuler and Bartels) that can get a little confidence early, and Maddie got them in some good spots, they can get you some kills and I think that’s important,” Squiers said. “The more they play the better they get, the more experience they have.” Next, Jackson had 11 kills and nine digs, Wolfe provided 11 digs and five kills, Bartels hit .636 and registered seven kills and three blocks with Schuler and junior middle Anna Squiers (Kearney Catholic) having solo blocks. Finally the Tigers got 12 kills and a .333 hitting percentage from sophomore outside Isabelle Reynolds. The match with the Griffons (14-10, 8-8) is set for 6 p.m. Saturday, a few hours after the UNK-Mo West football game across the parking lot at Spratt Stadium.