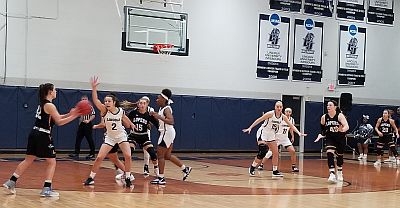 Kearney, Neb. – The No. 22/25 Nebraska-Kearney women’s basketball was strong at the end of the first half and to start the second half to hold off Lincoln, 60-52, Thursday night in Jefferson City, Mo.

UNK built a 17-point third quarter lead thanks to a 15-3 run to close the second quarter and then a 13-6 spurt to start the second half. The Lopers misfired on nine of its first 10 three pointers but managed four during this long run including two by point guard Haley Simental (Pueblo West, Colo.). Her second made it 42-25 with 5:53 left in the third.

However, after a timeout, the Blue Tigers went on an 11-0 run to give themselves a chance until the final minute. The run featured a three-point play by senior guard Kaloni Pryear (game-high 21 points), four missed UNK shots and four of the Lopers 10 turnovers.

A three by Simental stemmed the tide for a bit but LU cut it to a five-point deficit, 49-44, with 6:05 to play after two free throws by freshman guard Natasha Elliott. Lincoln came in shooting 59% at the line but sunk 7 of 9 tonight. After a Blue Tiger turnover Elkhorn sophomore post Brooke Carlson converted a layup to push the lead back to seven and LU didn’t get closer than six the rest of the way.

Lincoln hung around thanks to a plus five rebounding margin and big nights from its top two players, Pryear and post Vivian Chigbu. The pair combined to go 16 of 35 from the field with Pryear, in addition to her point total, having six boards and four assists. She did foul out late in the fourth quarter. Chigbu, one of five foreigners on the LU roster, posted a double double (14 pts., 10 rebs.) in 34 minutes of work.

Finishing 6 of 17 from behind the arc, UNK got double digit efforts from Simental (16), Carlson (15) and Iowa sophomore wing Maegan Holt (12). Simental went 3 of 6 from downtown, Carlson recorded a seventh straight double digit effort with Holt making 4 of 5 free throws. Next both Simental and Carlson had four dimes with Carlson falling a rebound short of her third double double.

Kearney, Neb. – The Lincoln Blue Tigers got out to an early lead and held on to down Nebraska-Kearney, 64-61, Thursday night in Jefferson City, Mo.

“They made enough plays and we didn’t. They beat us like us on a drum on the boards in the first half,” UNK head coach Kevin Lofton said. “We had our chances but we missed layups, free throws and wide open shots.”

UNK got another big effort from Bellevue senior forward AJ Jackson (19 points and six rebounds) but couldn’t catch Lincoln after falling behind 13-7 eight minutes in. The Lopers missed 10 of their first 13 shots but were only down 28-25 at the break thanks to five three pointers.

Scoring 36 points in the paint, Lincoln was ahead 52-41 midway through the second half. UNK got layup from Kansas senior forward Morgan Soucie to make it 54-51 with just over seven minutes left to play. However a missed free throw and turnover followed with LU then sinking a three. The Blue Tigers led by at least three the rest of the way.

“We couldn’t stop them. We went to a zone to keep them in front of us. Their guys were hard to guard and elusive down near the basket,” Lofton said. “Sometimes from an athletic standout you are challenged.”

The Lopers were down 61-58 after Texas senior southpaw Chase Winchester sunk two free throws. With the shot clock winding down the Lopers were called for a foul and Lincoln went 1 of 2 at the line to make it a two-possession game. Kearney missed its next shot before Winchester nailed a three with a second left.

Jackson made 9 of 14 shots (1 of 1 threes) to reach his point total with Winchester and Soucie both finishing with 10 points. They each made three shots from the field with Winchester having five assists and Soucie providing seven boards.

A balanced LU attack was led by senior guard Jonell Burton who had 17 points, three boards and two assists. Six others scored including a big 14 points and three boards from 6-8 junior reserve Jordan Notch.