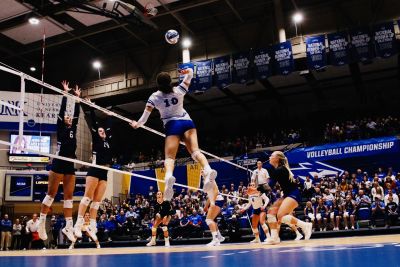 Kearney, Neb. – In one of the greatest comebacks in Nebraska-Kearney Athletics history, the second-ranked Loper volleyball team rallied from a 20-11 deficit in the fourth set and a 9-4 hole in the fifth to beat third-ranked Concordia-St. Paul (19-25, -19, 24-26, -23, -13) and win the NCAA Central Regional title Saturday night in the Health & Sports Center.

UNK (36-0) reaches the Elite Eight for the sixth time in program history and for the first time since being national runner in 2005. This year’s event will be at a familiar place, the Auraria Event Center on the campus of RMAC-member Metro State in Denver. Matches will be held December 12-14 with a committee reseeding the field after completion of all eight regional finals.

Not only was the comeback unlikely and improbable but the Lopers had to do it minus starting middle Michaela Bartels (Bennington) who suffered an injury in the first set and didn’t return. Seniors Josie Cox (North Platte) and Mackenzie Puckett (Grand Island) stepped in and both made key plays in the win.

“It’s one of those deals where I really don’t know what to say. That just doesn’t happen. We were not in a good situation. We fought a lot of adversity tonight, didn’t play well early, let a set get away from us that was tough blow to deal with at the time and then dug a huge hole,” UNK head coach Rick Squiers said. “It’s the most improbable victory I’ve ever been a part of. This group of players deserves an unbelieve amount of respect for what they just did, as does Concordia for playing a great match.”

Concordia-St. Paul (27-8), nine-time national champions, scored the final four points to improbably win the third set, 26-24. The Golden Bears, now 71-8 all-time in the NCAA Tournament, shot out to leads of 11-4 and 20-11 in the fourth thanks to strong serving, good defense and a balanced offensive attack.

However, the Lopers didn’t go quietly into the good night as senior outside Emma Benton (G.I. Central Catholic) served up four points to start comeback number one. This stretch cut the hole to 20-16 and featured a kill by senior outside Julianne Jackson (Bonner Springs, Kan.), an ace and two unforced Golden Bear errors.

“I was thinking one point at a time. As a senior, if this is going to be my last match, might as well go out tough and make it hard on them,” Jackson said. “I think everyone bought into the one point at time. We just started to make plays happen.”

CU was still up 22-18 when Jackson recorded a solo block and the Bears called its second timeout. Junior right side Mary Katherine Wolfe (Omaha Marian) then stepped to the line and served up four straight points – a block and three Jackson kills – to give UNK its first lead. While CU tied things on a kill, another Jackson kill and unforced CU attack error suddenly had the match tied at two.

Region finalists for the 11th time in 12 years, CU hushed the crowed of 2,677 briefly as they grabbed leads of 3-0, 4-1, 6-3 and 9-4 in the fifth. Back-to-back kills by redshirt freshman outside Sami Mauch (North Platte) started comeback number two and forced CU to spend its first timeout at 9-6.

Concordia kept the lead a three, 11-8, on a kill by senior middle Sara Macek but Kearney closed on a 7-2 run. The points came via three kills, two blocks, and two unforced CU attack errors. They ended with 32 on the night, 16 of the unforced variety.

Fittingly, Jackson had a solo block to end the night and send the H&S Center into a frenzy. The Co-MIAA player of the Year had a career-high 22 kills, 12 coming over the final two sets, while also having 19 digs, five blocks (four solo) and two assists.

“We didn’t do all that things differently. Sami coming in and scoring a bunch of points was a big factor,” Squiers said. “We kinds of steadied things (serve receive in the fourth and fifth sets) just enough and then the Health & Sports Center kind of took over.”

“That was a rough one. For them congrats. I think they did a job of continuing to play and then their seventh man, so to speak, kind of took over and really helped with their momentum a lot,” CU head coach Brady Starkey said. “We just got stuck in a couple of rotations and got stuck there. Pretty frustrating … we had a big lead and should’ve put it away and we didn’t.”

Four CU players had a double digit kill total including 20 by junior outside Erin Fallert and 19 from freshman right side Jasmine Mulvihill. Finally junior libero Tori Hanson dug up 35 balls.