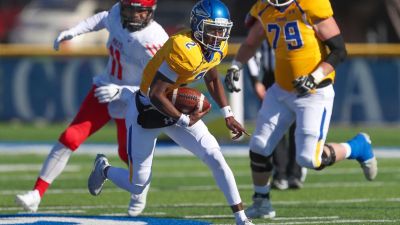 Kearney, Neb. – Nebraska-Kearney has placed 14 players on the 2019 All-MIAA team. The league’s 12 head coaches nominate and vote on the makeup of the squad and cannot vote for their own players. Leading the way is first-team selections Hinwa Allieu (defensive line) and Sal Silvio (linebacker) with quarterback/all-purpose back TJ Davis tabbed as the MIAA Freshman of the Year. Davis (Colorado Springs) becomes UNK football’s first MIAA “special award” winner since the program joined the league in 2012. Davis made the second-team offense as an all-purpose back with senior left guard Josh Stoltenberg (Creighton Prep) and junior right tackle Corey Hoelck (Giltner) joining him.

UNK’s rushing attack garnered the most honors as four linemen, three running backs and the quarterback were all tabbed. The Lopers enter the Mineral Water Bowl averaging 331 yards per game with 39 touchdowns, each among the best numbers in Division II. The line also has allowed just 15 sacks all season. Goodwin (963), Davis (886), Webb (759) and Sealey (635) rank one through four in overall rushing yards on the team with Davis at 12 scores, Webb at nine and Goodwin with eight. In the air Davis is completing 56% of his passes for eight TD’s and is averaging a healthy 18.1 yards per completion. His favorite target has been Young who is now up to 19 receptions for 564 yards (29.7 avg.) and three TD’s. He also had 310 yards on 14 kick returns.

Defensively, Silvio (80) and James (79) lead the team in tackles with Silvio also first in TFL’s (10.0), sacks (8.0), forced fumbles (four) and fumble recoveries (three). Sullivan (40) and Allieu (38) have combined for 78 tackles with Allieu at 8.5 TFL’s including 4.5 sacks. Next Ingraham has plugged the middle to the tune of 23 stops and 5.5 TFL’s Central Missouri senior QB Brook Bolles is the Offensive Player of the Year with Northwest Missouri State senior lineman Spencer Phillips the Defensive P.O.Y. Finally senior kicker Date Brown of Fort Hays State is the top Special Teams Player with UCM’s Jim Svoboda the Coach of the Year. UNK (6-5) faces the Winona State Warriors (8-3) on Saturday, December 7, in the Mineral Water Bowl in Excelsior Springs, Mo.