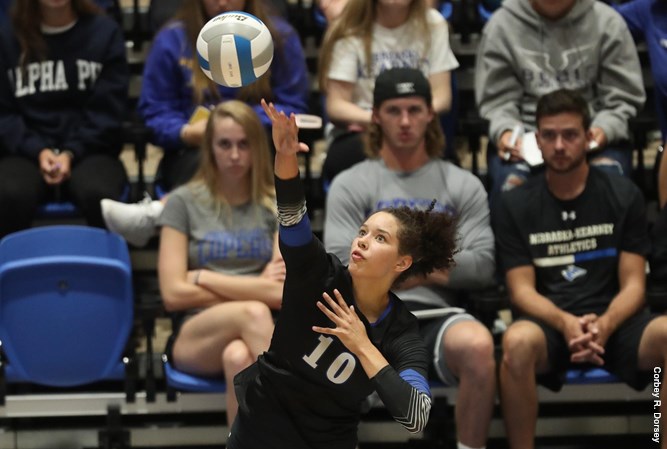 The match was part of the annual Rosella Meier Fall Classic presented by Runza and New Victorian Inn & Suites. UNK (9-0) swept New Mexico Highlands earlier in the day to finish 4-0 in the tourney and take home the trophy. The RU Hawks went 3-1 and are now 5-2 on the year.

The Kearney and Rockhurst match not only was a Top 25 battle but also featured two of the winningest head coaches in college volleyball. There are over 2,200 combined wins between UNK’s Rick Squiers and RU’s Tracy Rietzke.

As expected it was a donnybrook as the match featured 31 ties and nine lead changes with the squads combining for 215 digs, 109 kills and 20 team blocks. UNK got hot as the night wore along to out hit Rockhurst by a .167-.083 margin.

“You don’t get to breath very often in a match like this. It was so tight that you felt one spurt from either side is going to open up things,” Squiers said. “We had that spurt in the third set. If you’re on the other side of that you start to realize this may get away from us.” UNK grabbed a 1-0 lead thanks to closing set one on a 6-4 run. The stretch featured kills by four different players and two unforced RU attack errors. The second set was the best of the night as there were 18 ties and six lead changes. Rockhurst fought off three set points to win by two; the Hawks final points came on a kill and a block by senior outside Karli Reichert.

The Lopers dominated set three, holding RU to a negative .068 percentage (7-10-44) on the strength of four blocks and six errors. Offensively the Blue & Gold had 14 kills, a mark they reached in all four sets.

Rockhurst didn’t go away quietly, however, rallying from an 18-13 deficit in the fourth to trail by a just a 22-21 count after its fifth ace of the match. UNK finished the two hour match thanks to two kills and an unforced Hawk errors. The final point was on Wolfe’s match-high 18th kill. She reached that total in 41 swings (.341 pct.).

“You get some confidence playing another quality opponent that’s always prepared and does a lot of the same things you do,” Squiers said. “This is what a lot of MIAA matches will look like.”

Jackson (Bonner Springs, Kan.) had 16 kills over 49 attempts (.245 pct.) while getting to 19 balls and blocking three at the next. Next, Lincoln sophomore libero Lindsay Nottlemann managed a match-high 35 digs with Kearney junior setter Madison Squiers at 50 assists, 20 digs, five kills and two blocks. The 35 digs are five off the school record, held by Kelli Wemhoff in a 2006 win over Northern State, and three shy of tying the four-set record.

Reichert had a team-high 13 kills for RU but needed 65 swings to do so. She also had 19 digs, two aces and two blocks with Gretna senior outside Alyssa Woodman (11) the other Hawk with a double digit kill total.

Against an overmatched Highlands team that is now 1-6 on the young year, UNK had 42 kills and allowed just 23 total points (-9, -6, -8). That is believed to be a new school record. North Platte redshirt freshman outside hitter Sami Mauch had 10 kills with Nottlemann at 18 digs and Squiers recording 25 assists, seven digs, three blocks and three kills.