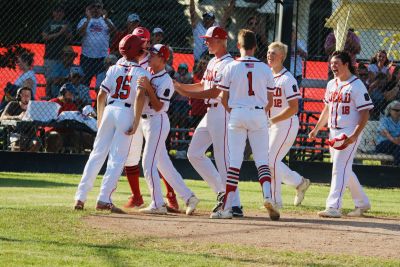 The Cozad Reds Seniors fell behind early and couldn’t come back in a 10-4 loss to McCook in the B-6 District Championship game on Tuesday. McCook built a 6-0 nothing lead through three innings and eventually pulled away for the win. Jacob Engel who was making his first start in a Seniors game went 4 1/3 innings allowing six hits and nine runs while walking two for the Reds. James Mockery picked up the win for McCook as he pitched a strong game striking out nine and allowing six hits and three runs. Cozad ends the season at 16-11, McCook has now won 27 games this summer and now heads to the Class B State Tournament in Gering this weekend.

In the first game on Tuesday, Nolan Wetovick drove in two and scored the winning run in the bottom of the 7th as Cozad beat McCook 3-2. Wetovick scored on a throwing error with two outs. Austin Werner threw a complete game for the Red allowing six hits and two runs over seven innings. Trae Koetter took the loss while going six and two-thirds as he allowed six hits and three runs while striking out two.