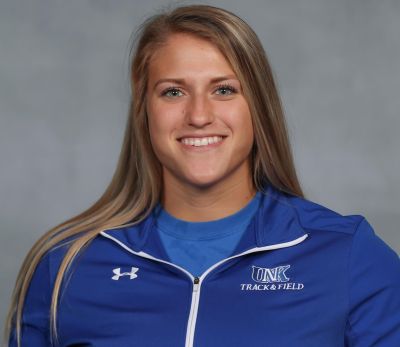 Kearney, Neb. – Junior co-captain Tiara Schmidt set a new school record in the weight throw and had a career-best effort in the shot put to lead Nebraska-Kearney on day two of the Bearcat Open Saturday in Maryville.

Schmidt (McCook) had a day to remember as she broke a 19-year old Loper standard in the weight throw when her third attempt flew 60-3. That allowed her to finish second behind Grand View’s LaVon Davis (62-8) and best the previous school mark of 59-11, set by UNK Athletic Hall of Famer Janet Boettcher in February 2001.

Next Schmidt won the shot put thanks to a toss of 48-10.25. That moves her up to fifth on the UNK all-time top 10 list. Nationally she now ranks seventh in both events.

Overall the Lopers had 31 top 12 finishes on Saturday. Besides Schmidt the other winner was Hastings sophomore Seth Simonson who had a career-best 1:53.08 in the 800. Pacing a field of 67, he now ranks seventh in school history in that event. On Friday Simonson helped the DMR team set a new school record (9:55.70).

On the women’s side Holdrege junior Baylie Bryant cleared 11-5.75 to be fifth in the pole vault, Imperial junior Desitny Reinke was fourth out of 57 in the mile (5:03.62), Omaha sophomore Alyssa Schlant was eighth in the high jump (5-1.25), and Gothenburg freshman Hannah Anderson finished fifth in the 800 (2:19.08).

UNK spends Valentine’s Day at the Concordia Invite next Friday.