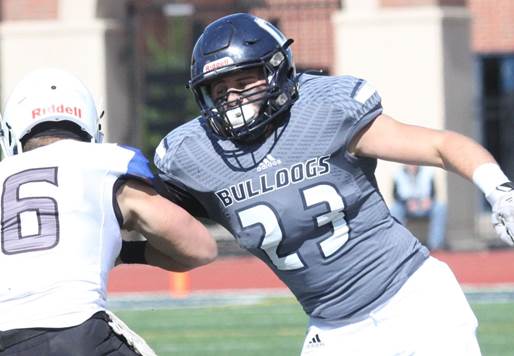 SEWARD, Neb. – Standout linebacker Lane Napier is now 3-for-3 in terms of collecting first team all-conference awards. The GPAC’s leading tackler for the second year in a row, Napier landed on the 2019 All-GPAC first team as one of eight players to represent the Concordia University football program with all-conference honors, as announced on Tuesday (Nov. 19).

Napier is carving out a career as one of the best to ever play at Concordia. Napier surpassed 100 tackles for the second year in a row while finishing with 108 in his junior season. This fall, the David City, Neb., native also recorded 10.5 tackles for loss, 4.5 sacks, three forced fumbles and an interception. Napier could again push for All-America honors after being chosen last season as a first team All-American by the Associated Press and as an honorable mention All-American by the American Football Coaches Association. With one year still remaining, Napier has compiled 347 tackles, 31 tackles for loss, 9.5 sacks and in interception in 30 career games.

After biding his time as a freshman in 2018, Beran broke loose this fall as the Bulldogs’ leading receiver. He caught 49 passes for 701 yards and two touchdowns. The native of Hutto, Texas, topped the 100-yard receiving mark three times with an especially big game at Hastings – 10 catches for 193 yards and two touchdowns. Beran caught at least one pass in all 10 games in 2019.

Mitchell served as a ball-hawk in the secondary. He ranked second in the GPAC with five interceptions while also breaking up eight passes. The Waverly, Kan., native added 28 tackles. He picked off two passes versus Northwestern, an NAIA playoff qualifier. The 2019 campaign was Mitchell’s first as a full-time starter in the secondary.

Rudloff enjoyed the best season of his career as a senior. Also an Academic All-District choice (by College Sports Information Directors of America), the native of Battle Creek, Neb., ranked second in the GPAC with a career high nine sacks. He added 41 tackles, including 10 for loss and was credited with five quarterback hurries and a forced fumble. Rudloff registered 120 tackles in his career.

A native of Wilber, Neb., Tachovksy moved up from honorable mention All-GPAC recognition a year ago. As a senior, Tachovsky racked up 88 tackles, 9.5 tackles for loss, two sacks, two interceptions, two fumble recoveries and four pass breakups. He notched double-digit tackle numbers in each of his final four games. Tachovsky finished his career with 206 tackles, including 17.5 for loss.

An NAIA Scholar-Athlete, Bilstein (Atkinson, Neb.) posted a career high 69 tackles in 2019. He also collected 11 tackles for loss, 3.5 sacks, four pass breakups and a fumble recovery. In the season opening game versus Briar Cliff, Bilstein put up 13 tackles, 2.5 tackles for loss and a sack. He concluded his career with 126 tackles, including 19.5 for loss.

Castaneda enjoyed a fine season as Concordia’s punter and as a receiver. The native of San Antonio, Texas, ranked third in the GPAC in punting average (38.4) while landing 16 of his 64 punts inside the opponent’s 20-yard line. He also caught 20 passes for 264 yards and three touchdowns. In his career, Castaneda has 49 receptions for 554 yards and six touchdowns.