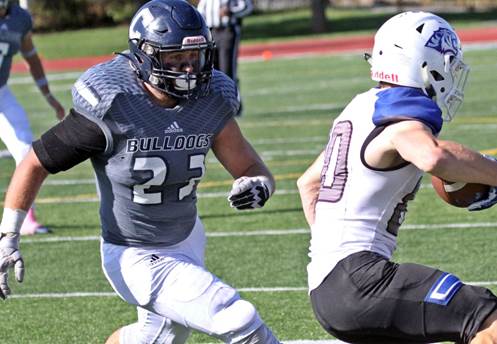 SEWARD, Neb. – A star for one of the top defenses in the nation, junior linebacker Lane Napier has been named the GPAC/Hauff Mid-America Sports Defensive Player of the Week, as announced on Monday (Oct. 14). Napier has been bestowed the honor three times in his career, including once as a freshman and once as a sophomore. A Concordia University football player has taken the GPAC weekly defensive award in three of the past four weeks with the accolade going to senior Derek Tachovsky on Sept. 23 and to freshman AJ Jenkins on Sept. 30.

There were a number of Bulldog defenders who stood out in last week’s 24-17 victory over Dakota Wesleyan. Concordia collected six sacks and held the Tigers to 12 rushing yards in another stellar performance. At inside backer, Napier emerged from the win with 12 tackles, 1.5 tackles for loss and half of a sack. He also recorded the first interception of his career by picking off a pass on a fourth down play in the fourth quarter.

The David City, Neb., native became the program’s first player during the GPAC era to surpass 300 career tackles. Through 26 career collegiate games, Napier has amassed 311 tackles, 29 tackles for loss, nine sacks and one interception. Napier currently ranks third nationally with an average of 12.0 tackles per game (72 total tackles this season).