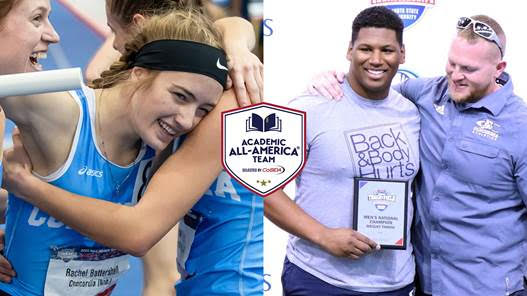 SEWARD, Neb. – Named to 2020 Academic All-District® Men’s and Women’s Track & Field/Cross Country Teams in late May, national champions Rachel Battershell and Jacob Cornelio have risen to the status of Academic All-America®, as announced by College Sports Information Directors of America (CoSIDA) on Monday (June 22). Battershell landed on the NAIA’s first team while Cornelio was voted to the second team. A total of 22 women and 21 men were recognized as Academic All-Americans.

The CoSIDA Academic All-America® Track & Field/Cross Country Teams have been released to recognize the nation’s top student-athletes for their combined performances athletically and in the classroom. For more information about the Academic All-District® and Academic All-America® Teams program, please visit http://cosida.com. Due to the cancelation of the 2020 outdoor season, career achievements were considered for these honors.

This is just the latest honor for Battershell, a sophomore from Wheatland, Wyo. Among her accomplishments this past indoor season, Battershell won the NAIA 400 meter national title and raced to GPAC Athlete of the Year and GPAC Athlete of the Meet accolades. She broke the school record in the 400 with her time of 54.77 at nationals. Battershell was a 2020 GPAC champion in the 400 meters, 60 meter hurdles and as part of the 4×400 meter relay. The relay team that Battershell anchored placed second at the national championships in a program standard time of 3:47.39. Battershell is already a four-time All-American. She is a biology major with a near spotless grade-point average.

A native of Elk Grove, Calif., Jacob Cornelio broke through with his first career national title by way of winning the NAIA weight throw competition this past indoor season. The five-time All-American also was the 2019 NAIA weight throw national runner up. Cornelio is a three-time GPAC champion. On the program’s all-time lists, Cornelio ranks No. 2 in the weight throw (65’ 11 ½”) and No. 4 in the hammer throw (202’ 5”). A team captain, Cornelio earned his degree in psychology. He plans to return in the spring of 2021 to complete his outdoor eligibility.