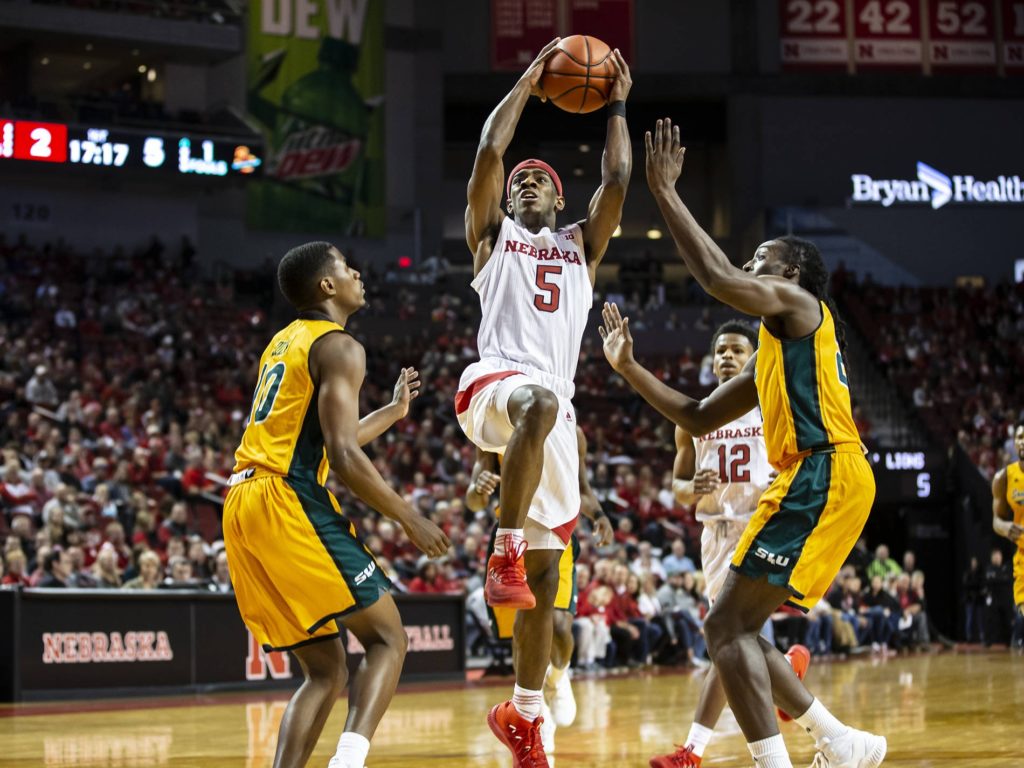 Glynn Watson Jr. and the Huskers head to Minnesota on Wednesday evening. Photo by Allyssa Hynes/Nebraska Communications
The No. 24/25 Nebraska men’s basketball team looks to build on their best start in 15 seasons on Wednesday evening, as the Huskers travel to Minnesota. Tipoff is set for shortly after 8 p.m. (central) from historic Williams Arena.
The matchup between the Huskers and Golden Gophers will be televised nationally on BTN with Cory Provus and Stephen Bardo on the call. Sunday’s game will also be available on the BTN2Go and Fox Sports Go apps.
Fans can follow all of the action across the state of Nebraska on the IMG Husker Sports Network with Kent Pavelka and Jake Muhleisen on the call. The game will also be available on Huskers.com, on the Huskers app, on TuneIn Radio and the TuneIn Radio app and on SiriusXM radio. The pregame show begins one hour prior to tipoff on many of the Husker Sports Network affiliates.
The Huskers are 7-1 on the season following a 75-60 win over Illinois in their Big Ten opener on Sunday night. James Palmer Jr. had a game-high 23 points to lead three Huskers in double figures, as the Huskers raced out to a 13-2 lead and never trailed. The Huskers held Illinois to 40 percent shooting and went 25-of-30 from the foul line against a physical Fighting Illini squad. Isaac Copeland and Glynn Watson Jr. added 16 and 14 markers, respectively.  The two wins last week moved NU into the top 25 in both polls released Monday.
Palmer comes off his best week of the season, averaging 21.5 points and 6.0 rebounds in a pair of wins last week. The senior is finding his stride from 3-point range, going 5-of-11 from beyond the arc against Clemson and Illinois. While Palmer has led an attack which has three double figure scorers, Nebraska’s forte has been on the defensive end of the court. The Huskers are second in the Big Ten in scoring defense (54.5) and field goal defense (.352) after holding Illinois to 60 points on .404 percent shooting. Illinois was the fifth team NU has held to under 60 points this season.
Minnesota comes into Wednesday’s contest with a 6-2 mark after falling at Ohio State Sunday evening. The Gophers already have wins over Oklahoma State, Washington, Texas A&M and Utah and will be playing their first home game since Nov. 12 on Wednesday. The Gophers feature one of the Big Ten’s best interior players in Jordan Murphy, who is averaging 14.6 points and 12.0 rebounds per game.

OPENING NUMBER
1 – Glynn Watson Jr. will reach 300 career assists with his first one on Wednesday evening. Watson also has a career best 3.2-to-1 assist to turnover ratio.