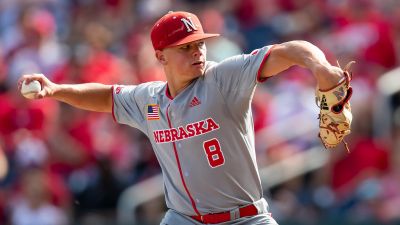 Omaha, Neb. – The Nebraska baseball team (31-22) fell to Ohio State, 3-1, in the Big Ten championship game in front 17,503 fans at TD Ameritrade Park on Sunday afternoon. It marked the second-largest crowd in a college baseball game this season, behind only the 18,861 that attended Georgia-Georgia Tech on April 23 in Atlanta, Ga.

The Huskers take runner-up honors at the Big Ten Tournament for the third time in the last seven years. NU finished second in 2013 in Minneapolis and 2014 in Omaha, both times falling to Indiana.

In the opening frame, Aaron Palensky drew a two-out walk, but remained stranded in a scoreless inning for the Big Red. Ohio State scored one run to take the early 1-0 lead as three of the first four hitters reached base. Waldron recorded two strikeouts.

After back-to-back strikeouts in the top of the second, Alex Henwood drew a walk. He was thrown out at second after trying to advance on a wild pitch. The Buckeyes went down in order in the bottom of the second.

Mojo Hagge managed NU’s first hit of the game in the top of the third. Each of the Huskers’ other three batters during the inning produced outs. Ohio State had two baserunners in the bottom of the third, but left both on base.

In the top of the fourth, the Huskers went down 1-2-3. Ohio State scored one run in the bottom of the fourth to take a 2-0 lead. Back-to-back no-out singles got them started before a sacrifice fly brought in the run.

Joe Acker singled in the top of the fifth, but was left stranded as the other Husker batters had two groundouts and a strikeout. The Buckeyes managed one hit in the bottom of the fifth, but left the runner stranded on first base.

Nebraska scored its first run of the game in the top of the sixth to cut the deficit to 2-1. Cam Chick reached on a one-out error before a strikeout marked the second out. Each of the next three batters drew walks to bring in one run before a flyout to center field. In the bottom of the sixth, the Buckeyes went down in order with two pop-outs and a groundout.

Acker singled and Colby Gomes walked to put the first two runners on in the top of the seventh. A sacrifice bunt advanced them to second and third. They remained stranded following a strikeout and groundout. In the bottom of the seventh, Ohio State was retired in order.

Hellstrom hit a two-out single in the top of the eighth, but was left stranded. Ohio State added a run in the bottom of the eighth to take a 3-1 lead. Each of the first two Buckeye batters reached base before a sacrifice fly brought in the insurance run. In the top of the ninth, the Huskers went down in order on three strikeouts. The NCAA Tournament Selection Show is set for Monday at 11 a.m. (CT) on ESPNU.