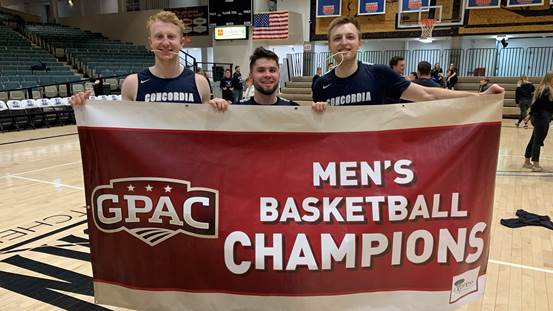 SEWARD, Neb. – Director of Athletics Devin Smith understands the history of the Concordia University men’s basketball program about as well as anyone. His passion was obvious as he spoke to members of the 2019-20 national qualifying Bulldogs, who had just watched the national tournament selection show in the Walz conference room on Wednesday (March 4). Smith knows something about playing deep into March.

There was a shared feeling. It was time for this program to be back at the national tournament. After a 15-year hiatus, Concordia will make its long anticipated return to the national stage when the ball is tipped off next Thursday (March 12) in Sioux Falls, S.D.

There’s been an outpouring of congratulatory social media posts and texts directed towards the current team that has ended the drought. A key figure on the first national tournament team in school history, Smith challenged the Bulldogs to think about doing more than just getting there. Meanwhile, standouts from the 2004-05 squad (the most recent to reach the national tournament) also weighed in. Tweeted all-time leading scorer Jon Ziegler, “Congrats boys. Keep this thing rolling at the National Tourney!”

That’s exactly what Concordia will attempt to do. As the No. 7 seed in the Cramer Bracket of the NAIA Division II National Championship, the Bulldogs will take on second-seeded and fifth-ranked Ottawa University (Kan.) at 10:15 a.m. CT on March 12. The Sanford Pentagon in Sioux Falls will serve as the venue for the entire national tournament.

The layoff provides plenty of time for everything to sink in. As the NAIA coaches’ poll was revealed on Wednesday in conjunction with the national qualifiers, it became apparent that Concordia would have been left out of the field had it not won at the Corn Palace in the GPAC tournament championship game. With everything on the line, the Bulldogs held off 11th-ranked Dakota Wesleyan, 68-66. Concordia made certain it could not be denied a seat at the table.

“It’s just a crazy feeling accomplishing something that we have talked about since the end of last season,” said sophomore Carter Kent. “I think the best thing during the game was just how we stuck together. DWU got on a run to begin the second half, and we just kept grinding away to stop that run. It feels great being able to go to the National tournament, and the biggest feeling is just that we still have goals ahead of us. We all are so happy with the win last night, but we are still fixed on what is to come.”

The last time Concordia stepped on the court at a national tournament game, the likes of Ziegler and Jason Jisa had led a squad coached by Grant Schmidt to the national championship game. During a successful 23-year tenure, Schmidt guided the program to its first and only nine national tournament appearances. Smith played on the trailblazing teams of 1990-91 and 1991-92. The latter team reached the national semifinals.

Now a team spurred by seniors such as Tanner Shuck and Brevin Sloup has a chance to put its own stamp on Bulldog national tournament history. No matter how things shake out, this group will have the distinction of putting the program back at the level it feels like it belongs at. The GPAC championship game at Dakota Wesleyan will never be forgotten.

“Winning the GPAC title with this group of players and coaches is an unbelievable feeling,” Sloup said. “The amount of joy and excitement I felt when the final buzzer sounded is indescribable. All the work this team has put in to get to this point is extremely satisfying. There was so much at stake last night with the conference title and national tourney berth on the line, it couldn’t have ended any better. We aren’t surprised because there was always belief within this team and we are excited to make a run in the National Tournament.”

Limback himself starred on three national tournament teams while playing for Coach Schmidt. Limback is also well-connected to a large number of the program’s alums.

Said Limback on Tuesday night, “My phone has been blowing up. There’s a lot of pride in this program. I’ve heard from alums, teammates and from Coach (Grant) Schmidt too. The ’05 team has been texting. Any time this happens it’s fun to share it with the parents, the families and our alums.”

Ottawa won the Kansas Collegiate Athletic Conference regular-season title and was the KCAC tournament runner up. The Braves (27-6) did not play any teams out of the GPAC this season. Ottawa has qualified for the national tournament for the first time since 2009. The winner between Concordia and Ottawa will play either third-seeded Union (Ky.) or sixth-seeded Saint Francis (Ind.) in the second round at 4 p.m. CT on Friday, March 13,

Five facts about Concordia at the national tournament

·        The 2020 trip to nationals will mark the 10th all-time appearance on the national stage for the program. In the first nine appearances, all presided over by former head coach Grant Schmidt, the Bulldogs have a combined record of 11-9. Current head coach Ben Limback played for the national qualifying teams of 1996, 1997 and 1998.

·        The 2004-05 team set a still-intact school record with 32 wins that season. On the way to reaching the national title game, the ’04-5 group defeated Trinity Christian (Ill.), Flagler (Fla.), Cornerstone (Mich.) and Cedarville (Ohio) in Point Lookout, Mo. The Bulldogs then fell at the hands of Walsh (Ohio) in the program’s lone national title game appearance.

·        Schmidt led the Bulldogs to their first-ever national tournament appearance in 1991. At that time, the NAIA was still just one division for basketball (as it will be again starting in 2020-21). Four members of the 1990-91 squad have been inducted into the Concordia Athletic Hall of Fame: Matt List, John Puelz, Devin Smith and Mike Works. The latter three were also members of the 1991-92 squad that broke through with the program’s first-ever national tournament win.