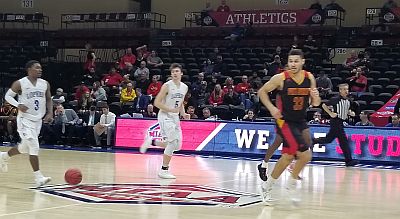 Kearney, Neb. – The Pittsburg State Gorillas rallied from a 14-point second half deficit and never trailed in overtime to down Nebraska-Kearney, 79-76, in an MIAA Tournament first round game Wednesday night in Kansas City.

The 10th-seeded Gorillas (12-17), winners of three straight, advance to a Thursday night quarterfinal contest against second-seed and nationally-ranked Rogers State (23-5). The Lopers end the year at 16-13. Back in January at the Health & Sports Center UNK downed Pitt 81-80 in OT>

Over the last three seasons UNK has seen 69% of its games decided by 10 points or less (30-30 record). The team’s final three games this winter were decided by a combined nine points.

“I’m extremely proud of our basketball team and what went through this year and what we accomplished. Unfortunately it didn’t go the way we wanted it to tonight. You have to give credit to Pitt State … their kids hung in there and battled and battled and were able to make some plays down the stretch,” UNK head coach Kevin Lofton said.  ​

UNK led for 34:31 and held a 53-39 cushion with 11:40 to play and then a 68-63 advantage at the 3:07 mark. However the Lopers went scoreless over the next five minutes of clock time to trail 74-68. During the stretch Kearney missed all seven shots it took, had one turnover and couldn’t connect on the front end of a one-and-one free throw with 10 seconds left in regulation and the game knotted at 68.

“Defensively we did some really good things in the first half … that was a big key. We got some turnovers and were able to disrupt their rhythm and continuity. They did manhandle us on the boards,” Lofton said. “We had a comfort zone in the second half but they put a zone on and that shook us up a bit. We seemed to find it for a short stretch there but I don’t think we had an (offensive) rhythm like we did in the first half.”

The last three minutes of regulation was wild as Pitt sunk a deep three from the left wing to get within two, survived a missed UNK shot and then got bucket in the lane from senior guard Jah-Kobe Womack with 2:00 to tie things at 68. Pitt never led in the second half and was up 6-3 in the early going before falling behind.

​The final 2:00 minutes featured four missed Loper shots, two misfires by Pitt and two Gorillas turnovers. The second miscue led to the free throw attempt with 10 seconds left with PSU having a chance to win at the buzzer but a put-back attempt that found net came after the horn.

In overtime Pitt was seemingly in good shape up 77-70 with 2:12 left. But UNK got threes from Kansas senior Morgan Soucie and Iowa senior Kyle Juhl to get within two. The Gorillas went 1 of 4 at the line over the final 21 seconds to allow UNK two chances to tie things and force another OT. However the Lopers lost the ball out of bounds with 19 seconds left and then a Juhl three with four seconds remaining found iron instead of nylon.

“We had some crucial plays down the stretch you’d like to have back. Be a littler sharper but all in all I think our players left it out there,” Lofton said. “They had a couple of guys make more plays that we did.”

Pitt won thanks to a 46-34 advantage on the glass that included 15 o-boards. Those led to 15 second chance points with the minus 12 rebounding margin UNK’s biggest deficit of the season. Next the Gorillas got 23 points off its bench and had three starters score in double figures.

Both teams had turnovers with UNK going 12 of 18 at the line including three misses when it was up 52-39. The Lopers did go 10 of 26 from behind the arc and had three starters reach double digits.

Soucie capped a super senior season with 26 points, eight rebounds and three dimes. He made 9 of 18 shots (2 of 2 threes) to tally 61 points vs. Pitt this winter. Next Bellevue senior AJ Jackson had 12 points, eight rebounds and two assists with Utah junior Jake Walker hitting three treys early in the second half to finish with 13 points. He also had a team-best six assists. Finally Juhl ends his career with 171 made threes, ninth most in school history, with Jackson’s 60.6 field goal percentage ranking third highest in Loper lore (175-199 attempts). ​

“I told them all year long to put last season past us. One of the biggest goals I had for them and I think they had for themselves was that we wanted to reestablish our culture and identity. For a lot of years our program has been known for having mentally tough, gritty kids that played really hard. That played smart, played together and we thought we lost that last year,” Lofton said. “The second thing we wanted to do was to qualify for this tournament. We made it five straight years and maybe you start to take it for granted and not realize how special it is to be down here competing.”

Pitt got a double double from 6-0, 165 pound senior guard A.J. Walker (21 points & 10 rebounds) who played all 45 minutes. Womack had three of his team’s eight threes to score 17 with starting forward Christian Edmondson supplying 12 points and five boards. Finally six-nine, 260 pound junior reserve post Antonio Givens II was effective in the first half to end up with 10 points.