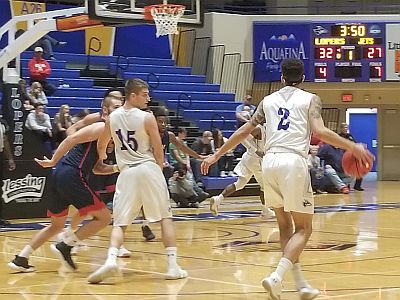 However the Jets hung around thanks to the play of three Division I transfers in Juwan Davenport (Coppin State, Md.), Marshawn Blackmon (Eastern Illinois) and Kaleb Allison (Mississippi Valley State). Cranking up the pressure on both ends of the court midway through the second half NU got the deficit down to seven, 68-61, with 4:52 to play. An 11-3 spurt was capped by Blackmon put-back.

Like it has much of the season, UNK responded as Iowa senior Kyle Juhl made two free throws, Walker (Centerville, Utah) hit a jumper and Bellevue junior AJ Jackson scored inside. That got the back to 10 points and then Walker nailed the door shot with his seventh and final triple of the game.

“Shooting the ball helped us. Second half it really opened up for us … Kyle hit a couple and obviously Jake got it going. It always helps when you put the ball in the basket,” UNK head coach Kevin Lofton said. “Defensively we played well enough to stretch it to a pretty good lead. They made some plays and fought their way back into it, mainly from the foul line. That means we have to defend without fouling.”

In double figures for the 15th time this winter Walker was 9 of 15 from the floor (7 of 11 threes) to surpass the 23 points he tallied in a loss to nationally-ranked Missouri Southern State. Seventeen of his points came and five of his treys came after the break

Three others starters were in double figures in Kansas senior Morgan Soucie (16), Jackson (14) and Juhl (10). Soucie added five assists and Jackson had five rebounds with Juhl having all of his points in the second half.

“We kept our composure (late). We executed well against their press which is something I was glad to see. Teams tend to press us at times and when you handled it like we did today, breaking it and scoring on the other end, it makes it a little bit harder for them to stay in that (defense),” Lofton said. “We got some momentum back so hopefully now we can go out on the road and have some success.”

Off the bench Bellevue redshirt freshman lefty Cedric Johnson had his best game to date; seven points, seven rebounds, six assists, one steal and no turnovers.

For the Jets Blackmom had a double double (21 points & 10 rebounds), Davenport was hot early to tally 18 with Allison having 11 of his 14 in the second half. NU finished the night just 2 of 13 from the three-point line and 16 of 26 from the line. UNK heads to Lincoln (Thurs.) and Central Missouri (Sat.) next week. 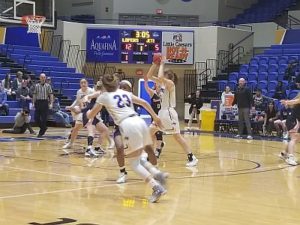 Kearney, Neb. – Sophomores Brooke Carlson and Maegan Holt combined for 34 points and 13 rebounds to help No. 23/30 Nebraska-Kearney down Newman, 59-46, Saturday afternoon at the Health & Sports Center.

To win a 10th straight game, the longest win streak in 11 years, UNK had to tangle with the Jets (9-15, 4-11) zone defense and patient offense. NU, now on a six-game skid, ran the shot clock down on most possessions and managed to make a late run after being down by as many as 23 points.

“They play a different style and go with a two three zone the entire game. We didn’t shoot the ball very well today and against a zone that can be a little bit challenging. It makes it trickier to stretch the floor when you’re not making shots,” UNK head coach Carrie Eighmey said. “We hit only two threes so I thought we did a good job of finding other ways to manufacture some points. Our bigs did a good job of getting to the line and making shots around the rim to help us build the lead.”

“I thought we managed the game pretty well. Late they went a little bit more to their full court press … we had only three turnovers so I thought we handled the ball really well,” Eighmey said. “The shots that we took, including the threes, were fairly wide open. We just weren’t able to knock them down today.”

Carlson tallied 11 of her game-high 19 points at the line with Holt 6 of 15 from the field to tally 15. UNK was just 2 of 18 from the three point line but Carlson and Holt helped the Lopers have a 30-14 advantage in points in the paint.

Next South Dakota sophomore Klaire Kirsch had 12 rebounds and four assists and Crofton junior Kelsey Sanger went for nine points and two steals. The pair also were key in shutting down NU start Kaitlyn Potter who came in averaging well over 16 points per game. She finished with 12 points but was just 3 of 17 (0 of 9 threes) from the field.

Newman finished 15 of 54 (27.8 pct.) from the floor but did get 30 bench points and sunk 13 of 15 free throws. Seven others besides Potter scored including a near double double by reserve Haley Albers (eight points and eight rebounds).

Before the showdown with the UCM Jennies the Lopers are at Lincoln (3-19, 0-13) on Thursday night.