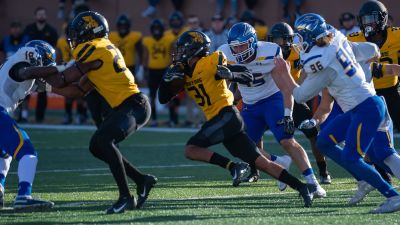 The Lopers (6-4) have now secured its first winning season since joining the MIAA in 2012. UNK hosts Washburn on “Senior Day” next Saturday and a bowl bid may be in the cards with a victory against the Ichabods (5-5).

UNK came in with Division II’s third ranked rushing attack at 315 yards per game. They almost had that total by halftime (299 yards) with the final tally the third highest in school history, trailing only 599 at Chadron State in 1996 and 593 earlier this season vs. Northeastern State. Next the six rushing scores tie for second most in Loper lore with the 71 carries third most in a single game. Finally Kearney averaged 7.9 yards per carry and had three individuals, for the second time this year, run for at least 100 yards.

All this came against a Griffon (7-3) squad that had won six straight to put itself into the national rankings and playoff consideration. Falling to UNK for just the second time since 1988, Mo West hadn’t lost since September 21 with the Lopers now an impressive 4-1 on the road in 2019.

Almost leading from start to finish UNK forced a fumble on the opening kickoff and scored six plays later when Luke Quinn (Scottsdale, Ariz.) ran eight yards on 3rd & 7. That marked the 16th career rushing score for the sixth-year receiver/running back. True freshman Trey Vaval, the MIAA’s top punt and kick returner, gave the Griffs a brief 7-6 lead when he brought back the ensuing kickoff 85 yards for a score. However, UNK tallied 29 of the next 35 points to build a 28-point cushion midway through the third quarter. And the lead could’ve been more as two drives stalled inside the Mo West 35-yard line.

To make it 35-14, senior back David Goodwin (Lauderhill, Fla.) had a nine-yard scoring run, senior back Darrius Webb (Allentown, Pa.) ran down the sidelines 59 yards for a TD, redshirt freshman quarterback TJ Davis (Colorado Springs) called his own number from nine yards out and then tossed a 53-yard scoring strike to senior receiver Sedarius Young (Orlando). Finally Webb twice ran for two-point conversions during this onslaught.

For good measure, Webb ran 71 yards for another score with Davis tallying his team-best 11th rushing TD of the season when he ran 11 yards for six points with 5:15 remaining. Just prior to Webb’s long scamper senior nose guard Jordan Ingraham (Miami) recorded a four-yard sack to stop the Griffs on fourth down from the Loper 25-yard line. That drive was setup by a 43-yard punt return by Vaval and soon after his team had made it a 35-21 ball game.

With all phases of the option attack working Webb amassed 184 yards on just six carries, Goodwin had 172 on 20 attempts with Davis having a season-high 30 totes for 149 yards. Also junior back Dayton Sealey (Hastings St. Cecilia) added 49 more yards on nine carries. Kearney just attempted six passes with senior receiver and former QB Cody Summers (Denver) having a 15-yard completion to Quinn in the third quarter to pick up a first down.