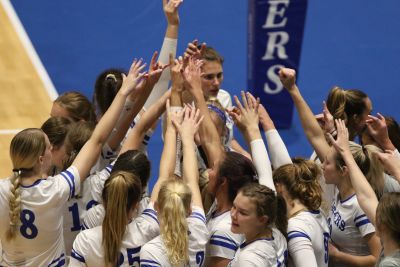 Kearney, Neb. – Senior outside Julianne Jackson had a career-high 19 kills and junior middle Anna Squiers and freshman outside Kamryn Schuler came up big in the fifth set to help No. 2 Nebraska-Kearney outlast a game Pittsburg State squad (-14, -21, 20-25, 23-25, -8) Saturday night at the Health & Sports Center.

This was the regular season finale for both teams. UNK (30-0, 20-0) joins the 2004 Lopers (33-0) as the only squads in school history to get through the regular season unscathed. Kearney now moves onto Kansas City where it’ll be the top seed in the MIAA Tournament. That eight-team event begins Thursday.

The young Gorillas (14-15, 7-13), the seventh seed in the upcoming tourney, almost managed to beat UNK for just the fourth time in 41 all-time meetings thanks to 90 digs, eight service aces and a huge performance by sophomore outside Meg Auten. She had a match-high 22 kills with 19 of those coming over the final three sets.

“It was a mixed bag (in the fifth set). Early on it didn’t look very good. We just had a horrible matchup issue that they eventually figured out and we never resolved. At some point in the match they decided (Auten) was unstoppable and she was,” UNK head coach Rick Squiers said. “I think our team was smart enough to realize that and knew we were going to have to side out through her in the three rotations in the front row and try and do something when she was in the back row.”​

The Lopers, out hitting Pitt by 71 points, had a season-high eight reception errors, five service errors and also committed an uncharacteristic 13 unforced attack errors. Many of those came in the third set to give Pitt life as they roared out to leads of 12-5 and 20-14.

However UNK was just four points from a four-set win but the Gorillas closed on a 6-2 run to force a decider. That stretch featured two unforced Loper attack errors and four kills.

“We tried and tell them even while it was going this isn’t the worst thing in the world. I know they wanted to win and wanted to go undefeated and that was probably our worst enemy at times. But they reached down and found a way,” Squiers said.

After hitting below .200 in the third and fourth sets the Lopers bounced back to tally a .269 mark (9-2-27) in the fifth. Down 3-1 in the early going, back-to-back kills by Schuler (Gretna) and Squiers (Kearney Catholic) made it 9-7 and forced Pitt to call its second timeout.

The break didn’t help as UNK didn’t trail again, getting an overpass kill by Squiers and then two more kills from Schuler to move ahead 12-8. Schuler made a brief appearance in the first set and then didn’t see the court until the start of the fifth.

With a crowd of 1,## on its feet throughout much of the fifth set, kills by Squiers and junior right side Mary Katherine Wolfe (Omaha Mariah) ended the 2:15 match.

“At some in the third or fourth set we were playing with a difference sense of urgency. Even though we didn’t win that set I remember talking to them and saying this where we have to be all the time. If we were doing this all the time we probably wouldn’t have been in this situation,” Squiers said. “Sometimes winning can be a terrible motivator. You start thinking it’s just going to happen and then a match like this forces you to realize it’s really hard to win. You have to play at a high level on every rally and scrap and claw, especially late in the season.”

Jackson (Bonner Springs, Kan.), who previous career-high in kills was 18, reached her tally in 50 swings with only two errors (.340 pct.). She also had 11 digs and two blocks with Schuler having those three big kills as well as two blocks. Next Squiers had 13 kills, eight digs, six blocks and hit .345 with Wolfe supplying 13 kills and nine digs. Finally junior setter Madison Squiers (Kearney Catholic) recorded 51 assists, 21 digs, six kills and a block.

Besides Auten’s heroics, Pitt got 25 digs and nine kills from senior outside Erika Ivkov, 11 kills and a .364 from sophomore middle Morgan Henning and 22 digs and eight assists from sophomore libero Marissa Bates.

“Being 30-0 is a refuse to lose attitude. It’s a group that fights with each other in practice when we’re doing the smallest of drills. Everybody always wants to be the winner. They’ve turned non-competitive drills into somehow they score them and somebody has to win and lose,” Squiers said. “So a very competitive group with a high volleyball IQ and a lot of experience and court time.