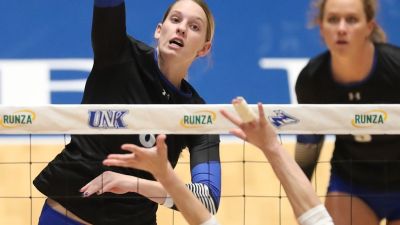 Playing the Warriors (13-18) for the first time in 29 years UNK hit an even .500 (47-7-80), the fourth highest attack percentage in school history. The Lopers had at least 14 kills and didn’t commit more than three errors in any set. Besides an efficient offense Kearney also served up eight aces and out dug Sterling by a 34-20 margin. Finally, the Warriors had 11 unforced attack errors.

“Really happy for Josie … she played really well. She’s been giving us a contribution throughout the year as more of a situational blocker. For her to be able to get out there and get involved with the offense is encouraging and really good to see,” UNK head coach Rick Squiers said. “We have a lot of volleyball left against high level competition and I think it leads us to believe there’s going to be a time and place we might need her to come in and do those very same things.”

Ten other Lopers had at least one kill including nine by Grand Island senior outside Emma Benton and six from North Platte redshirt freshman outside Sami Mauch. Next Imperial junior setter Taylin McNair had 17 assists, five digs and four kills with Stuart junior Monique Schafer at 10 digs and three aces. Finally Sterling got 20 digs from libero Carmin Butterworth. The Lopers host nationally-ranked NW Missouri State and Central Missouri this weekend.