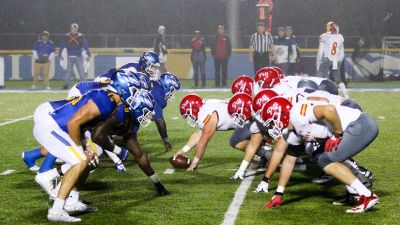 UNK Drops To 2-2 on the season-Photo Courtesy UNK

“Very good Pitt State team. I thought they did a good job of controlling the line of scrimmage … when you look at what we want to do and what they want to do, it all comes down to those fronts,” said Loper head coach Josh Lynn. “We didn’t run the ball effectively like we normally do and that’s a credit to those guys. And when we needed to throw it wasn’t on our terms. We had to throw it because we needed a first down. Hats off to Pitt State. The Lopers have to get better.”

On a rainy and cold “Family Night”, the Lopers once again came out of the gates strong. On the fourth play from scrimmage senior co-captain and inside linebacker Rakid Hill (St. Louis) picked off redshirt freshman Max Sexton at midfield. Five plays later senior quarterback Alex McGinnis (Crete) called his own number and scored from a yard out. He tossed a 39-yard completion to graduate receiver Luke Quinn (Scottsdale, Ariz.) to get the drive cooking. ​

However, Pitt scored 37 of the game’s next 44 points and tacked on 24 of those points in about a five minute span to take control. A 35-yard TD strike from sophomore Matt Harman to senior KiAnte Hardin made it 10-7 at the 2:22 mark of the first quarter. A Minnesota transfer and a starting corner, Hardin came in for this one offensive play and made a spectacular diving catch.

Pitt zoomed ahead 24-7 just two minutes into the second quarter as Sexton found sophomore Bryce Murphy from 23 yards out and then another Gorilla QB, sophomore Brandon Mlekus, hit All-MIAA receiver Lorenzo West for 68 yards and a 17-point lead.

“They did a good job throwing the ball tonight. We let receivers get behind us … I thought we played extremely well against the run up front. However when you play the run like that you’ve got to cover on the back end. Sometimes that relates to one-one-one match ups and we didn’t win those tonight. Their receivers out ran us.”

UNK showed life late in the half when Quinn ran nine yards for his first rushing score of 2019. The drive featured a 29-yard scamper by redshirt freshman QB TJ Davis (Colorado Springs) and an 11-yard punishing run by junior co-captain Dayton Sealey (Hastings).

The Lopers then picked off Pitt on its next two possessions but neither led to points and thus a 27-14 halftime deficit. The first INT came when senior safety Kevin Wilson (Lakeland, Fla.) tipped a ball in the UNK end zone that junior corner Terrell Williams (Miami) managed to corral. Junior corner David Tolentino Jr. (Sacramento) then snagged a pass thrown by Sexton with less than two minutes left in the half. A Pitt penalty moved the ball to the Gorilla 22-yard line but three plays netting one yard and a missed field goal followed.

​”Huge interception … had a chance to make it a 10-point game or a one score game. Goes back to red zone offense and putting points on the board. I don’t know how it weighed into the game but it would’ve given us some momentum heading into the second half,” said Lynn.

The second half featured Jared Vincent’s third made field goal of the game and his 13th three pointer of the year. Pitt then finished the scoring with a 38-yard pick six by junior safety Morgan Selemaea early in the fourth quarter. The Gorillas now have eight INT’s this year for 155 return yards and two scores.

“We didn’t do enough to win. In all three phases they played better than us,” said Lynn.

Seven Gorillas carried the ball led by Mlekus with 77 yards on 15 carries. Four different Pitt players tossed a passed and the group finished 12 of 19 for 228 yards, three TD’s and three INT’s. West (100) and fellow senior receiver Brenner Clemons had four catches apiece and combined for 157 yards.

UNK saw Davis run 16 times for 59 yards with seven others having at least one carry. Quinn managed two catches for 42 yards with redshirt freshman Michael Koch (Columbus) at three for 19 yards.