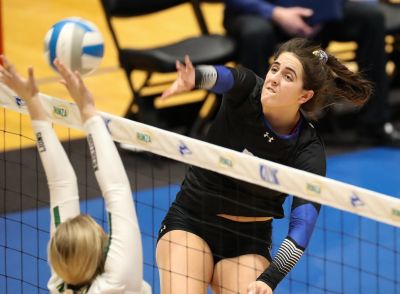 An improved Mo Southern squad (13-16, 6-13), who’ll the Lopers will face in the first round of the MIAA Tournament, was a bit shorthanded as setter Makenzie Fa’amausili-Cacoulidis missed her third straight match. While UNK didn’t trail until the third set the Lions hung around all night.

“I thought the match went like I hoped it would. They have a lot of offensive weapons and are a hard team to play. They come at you from both pins and tonight they played better defense than when we were down there,” UNK head coach Rick Squiers said. “That frustrated our attackers and definitely points out that we have some room to grow if we want to make a deep run in the postseason.” UNK out hit MSSU by a .238-.071 margin as it dug up 77 balls, had three team blocks and served tough. The balanced offense featured five players between 22-32 attack attempts with junior setter Madison Squiers (Kearney Catholic) finishing with 39 assists, seven digs and three kills.

The Lopers broke a nine all tie in the first set thanks to a 10-5 run. Bennington freshman middle Michaela Bartels was big in this set as she had five kills and no errors in seven swings (.714 pct.). The UNK momentum continued as it jumped out to lead of 9-3, 16-9 and 19-12 in set two. Junior middle Anna Squiers (Kearney Catholic) and senior outside Julianne Jackson (Bonner Springs, Kan.) led the way here, combining for 14 kills and no errors over 24 swings (.583 pct.).

“It was huge to see Michaela have that kind of performance tonight. We were struggling on both pins to get anything past their block so anytime we could get the ball in the middle it felt like good things happened, Squiers said.

However the Lions didn’t go away quietly, tying things at nine in the third set on a kill by Kierson Maydew. Like the first UNK had a nice response to the tune of a 10-3 run. This final push featured four more kills by Bartels.

“We got off to a slow start (in the third) and it was kind of a deal where they just didn’t go away. So we made some errors in the early part of the set and they looked like they were enjoying being in the Health & Sports Center. They weren’t ready to be done playing,” Squiers said.

Anna Squiers had a team-best 10 kills and hit .417 with Bartels and Jackson at nine kills apiece and junior right side Mary Katherine Wolfe supplying seven more. Finally Grenta freshman outside Kamryn Schuler had six kills with Jackson (22) pacing the Lopers in digs.

Mo Southern was led by Janelle Brehm who had 16 digs and 11 kills and took 51 swings.