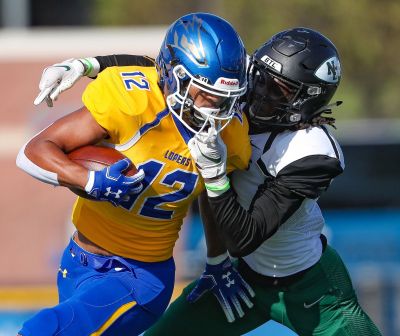 Kearney, Neb. – The Nebraska-Kearney football team ran for touchdowns on two of its first three offensive plays and ended up with 666 yards of total offense to dominate Northeastern State, 45-10, Saturday afternoon at Ron & Carol Cope Stadium at Foster Field.

UNK (3-2) beats the RiverHawks (0-5) from Tahlequah, Okla., for a third straight season and earns its first “Homecoming” win since 2011. That was the Lopers final season in the Rocky Mountain Athletic Conference (RMAC).

“I was extremely happy about the way our young men went out and executed. You know sometimes you go into the first afternoon home game and come out flat and I don’t think we did that today” Loper head coach Josh Lynn said. “I was extremely happy with the way we controlled the line of scrimmage. Our line did a good job of getting up to the linebackers and that was an emphasis this week. We changed up our scheme just a little bit to try and get better angles on linebackers and I really think it paid off for us today.”​

Using its reserves liberally UNK finished the day with 73 passing yards and 593 rushing yards. The Lopers briefly broke the school record for rushing yards in a game (599, at Chadron State, 1966) but a last minute loss of 13 yards on a punt pushed this effort to number two all-time.

Among the national leaders in rushing, UNK averaged a gaudy 12.1 yards per carry with six different player ripping off a run of at least 20 yards. Florida senior back David Goodwin had nine carries for 157 yards and two scores, Pennsylvania senior back Darrius Webb had two TD’s and 143 yards on just seven attempts with Omaha sophomore back Garrett Meyer at 113 yards on 11 totes.

Next Colorado redshirt freshman quarterback TJ Davis ran for 84 yards and two TD’s in his first collegiate start. He also completed his two passing attempts for 22 yards. Senior Alex McGinnis (Crete) and redshirt freshman Riley Harms (Fremont) also lined up behind center and combined to go 7 of 10 in the air for 51 yards while adding 32 more yards on the ground.

“TJ did a good job for the most part today. He got the ball to our backs when they needed it,” Lynn said. “TJ will be the first one to tell you that’s not his best performance yet … we have a long way to go. However, he’s really developed from this year to last year.”

The tally of 666 yards is fifth best in school history with the Lopers running for six TD’s vs. NSU for a second straight season. The school mark for rushing TD’s in a game is seven (at South Dakota Mines, 2012).

​Defensively the Lopers forced 10 punts and held NSU to 45 rushing yards on 33 carries (1.4 avg.). Two QB’s combined to go 20 of 37 in the air for 190 yards, one TD and no interceptions. However, they were sacked four times as UNK managed eight tackles for loss overall.

“Once again extremely happy with the defensive effort, not only in the first quarter but all the way through,” Lynn said. “And oh my gosh another thing too is the Homecoming game. We haven’t won once since joining the MIAA … it’ll be nice to go home tonight and celebrate a win.”

UNK heads to Lincoln (Mo.) University next weekend. The Blue Tigers fell to 0-5 on the year after a 56-14 loss today at No. 15 Pittsburg State.