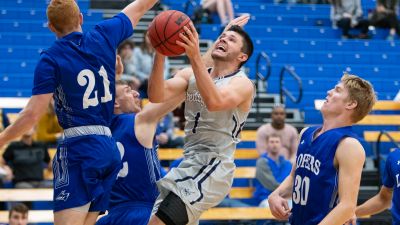 The Lopers overcame that by shooting 57% from the field (26 of 46), making nine three pointers, and out rebounding a much taller team by a 37-23 margin. Leading for 27 minutes overall, the Lopers scored the first five points and held an advantage throughout much of the first half. However 12 Kearney turnovers allowed the Orediggers to grab a 31-26 halftime lead. The Lopers had seven turnovers over the final 20 minutes and used a 16-0 run to grab the lead for good. Down 39-35 at the 16:48 mark, UNK saw Juhl (Harlan, Ia.) hit back-to-back-to-back three pointers to make it 47-39. Luger (Alliance) started the run with one of his three treys on the day with two layups by Texas junior newcomer RJ Pair capping things and making it 51-39 at the 12:01 mark. As expected Mines made a run of its own, getting a three from sophomore wing Brendan Sullivan to make it a 62-59 score with 4:05 left. The 20-11 spurt featured three ‘Digger triples and three Loper turnovers. UNK, which has now played 25 games decided by 10 points or less since the beginning of last year, got a key three by Luger from the top of the key with 1:10 left to make it a six-point cushion. Juhl then sunk four straight free throws with Pair making three of four to close things out. Luger reached his point total by going 7 of 9 from the field (4 of 4 threes) and 3 of 4 from the line. He also had five boards, a block and steal in 35 minutes. Juhl netted 18 of his 20 points in the second half as he made 4 of 9 threes while grabbing nine defensive caroms.

Next Kansas senior Morgan Soucie recorded his first career double double (12 points & 10 rebounds) with Pair at seven points, five assists, two steals and two boards. Finally Spalding redshirt sophomore Noah Valasek provided a key 11 minutes and came in with three points and a board in 11 minutes. Mines got 22 points from redshirt junior guard Mason Baker and 10 points from resdhirt junior reserve Kobi Betts. The ‘Diggers shot 41% from the field and were 9 of 27 from behind the arc. UNK plays a fourth straight RMAC foe, South Dakota Mines, Friday night at the Health & Sports Center.