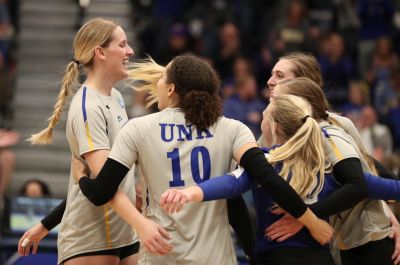 Kearney, Neb. – Junior middle Anna Squiers had a career-high 19 kills, senior outside Julianne Jackson had another double double and second-ranked Nebraska-Kearney had 14 blocks to down 19th-ranked Rockhurst (-23, 24-26, -22, -15) in a National Semifinal match Friday night in Denver.

The Lopers (38-0) will play for the 2019 NCAA Division II National Championship on Saturday at 6 p.m. Top-seed and No. 1 ranked Cal State San Bernardino (32-0) beat fourth-seed and No. 11 Regis in four sets on the other side of the bracket. The only previous meeting between UNK and San Bernardino came in the 2004 Elite Eight, a UNK win in Miami.

To reach its second national title match in program history and beat Rockhurst (33-8) for a second time this season, UNK managed to slow down a powerful Hawk offense. RU finished with 33 attack errors (19 unforced and 14 blocked) and saw the Lopers dig up 92 balls including 29 in the fourth set. That led to just a .140 (61-33-200) hitting efficiency for a squad among the national leaders in that category. ​

UNK cranked up its offense as the night went along, having 18 of its 59 kills in the third and logging at least 13 in each set. Hitting .208, the Lopers got kills from seven different players but saw Squiers and Jackson (20) cause the most damage with each hitting well over .300.

Some early RU unforced attack miscues helped UNK grab a 13-8 lead in the first set. The Lopers later led 18-13 and 21 16 but the Hawks didn’t go away, going on a 5-1 run to knot things up at 23. However, Kearney grabbed a 1-0 match lead on the strength of one of those 19 unforced errors and a block by senior middle Josie Cox (North Platte) and junior setter Madison Squiers (Kearney Catholic).

The second was a flip of the first and RU led almost the entire way but UNK hung around and tied things up at 23 on a kill by junior right side Mary Katherine Wolfe (Omaha Marian). She was then involved in a “video review” play as her apparent pancake led to an RU error and UNK’s first lead of the set. However, the review overturned the call. The Lopers fought off set point and had a couple of good swings to win the set but the Hawks dug up those balls and then used a kill and UNK error to win 26-24.

Another tied set followed with back-to-back kills by Anna Squiers giving UNK some breathing room at 20-15. A rare solo block by Wolfe made it 22-17 and it seemed like the Blue & Gold was in control But the Rangers went on a 5-1 run to force UNK to call timeout. The break worked as Jackson smashed home a kill and Madison Squiers and Cox combined for another stuff.

Finally Kearney rolled in the fourth, roaring out to a 9-5 lead and then ahead 21-12 before a semi-Hawk run. Fittingly an Anna Squiers ended the night.

Defensively for the Lopers Jackson had 19 digs, making this her 18th double double of the fall, with Wolfe at 18 and sophomore libero Lindsay Nottlemann at 19. Next Madison Squiers had 14 as well as five block assists with Cox (seven) and Anna Squiers (six) combing for 13 stuffs.

Rockhurst All-American outside Karli Reichert had 13 kills in 55 swings but also 11 errors (.036 pct.) with senior outside Alyssa Woodman having the same type of night (15-9-47; .128 pct.). Sophomore middle Justice Wingate had the most efficient effort, having 10 kills, seven blocks and hitting .429.  Saturday’s match can be heard on 93.1 KRVN FM, and on the River APP.