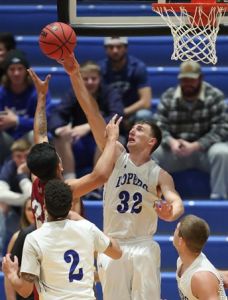 Kearney, Neb. – Junior forward Austin Luger hit a three pointer with 13 seconds left in regulation to force overtime and then Nebraska-Kearney outscored Chadron State 13-5 to post a come-from-behind 87-79 victory Wednesday night at the Health & Sports Center. This was the 180th all-time meeting between the Lopers (1-2) and Eagles (1-2) with UNK now having won 116 of the games. The Blue & Gold was a bit short handed as Bellevue senior forward AJ Jackson (injury) and New Zealand guard Matt Brien (NCAA certification process) were unavailable. Both are among the team’s top players.

The 2019-20 home opener for Kearney had a bit of everything including three late technical fouls on the Eagles. UNK led for 10:48 in the first half and by as many as seven but a size disadvantage and some struggles at the line allowed Chadron to lead 36-24 at the break. Six-seven, 250 pound Jacob Jefferson (20 points & eight rebounds) was one reason the Eagles held a 23-8 advantage on the glass by halftime. “We played ugly basketball in the first 20 minutes. Hats off to them … they came out and hit shots. I didn’t think we ran very good offense for a while there and when we did run good offense we couldn’t make anything,” UNK head coach Kevin Lofton said. “They took advantage and got us down and to our guys credit they didn’t hang their heads and feel sorry for themselves. They fought and found a way to get back into it.” UNK came out of the locker room with its hair on fire and went on a 14-4 run to trim the deficit to three. However every time the Lopers got close Chadron had an answer, usually from San Jose State transfer Brian Rodriguez-Flores (21 points). “We felt we had to do something different in the second half. We went back to some things we did in the past and Morgan Soucie was able to assert himself and get his confidence going and Austin was huge for us,” Lofton said.

The Lopers finally climbed the mountain and tied things at 51 with 9:05 remaining on two free throws by Utah junior Jake Walker (20 points). UNK had a chance to finally move ahead but missed two shots in the lane and the Eagles responded with a 9-2 run. Once more Kearney came back, getting a three from Luger (Alliance) with 3:44 left to make it a 67-66 deficit. Chadron, coming into the game with 57 turnovers, lost the ball twice in the final two minutes and both miscues led to Loper points. The second turnover was followed by a Walker three with 38 seconds left to make it 72-21 Eagles. Going 13 of 14 at the line while UNK finished 20 of 31, Chadron made two freebies with 35 seconds left to go up three. That allowed enough time for Luger to bury a triple from the left wing. The Eagles didn’t call timeout and a contested shot by reserve guard Michael Sparks in the lane didn’t drop with four seconds remaining.

In overtime UNK never trailed as Soucie (15 points) scored nine seconds in and then Luger sunk two free throws at the 3:15 mark to push the lead to 78-74. Chadron didn’t get closer than four the rest of the way. “Guys made plays. That’s the thing biggest thing about any sport you play and especially our sport … you can draw up whatever you want but guys got to make plays. Coming out of a timeout we ran a set play for Jake and he stuck a three. We set a ball screen and Austin popped and hit a three,” Lofton said. The Lopers tallied 25 of its points off 21 Eagle turnovers with both team shooting just under 50% from the field. Walker tallied his team-high 20 thanks to 6 of 13 (3 of 7 threes) shooting with Luger scoring 12 of his 14 points after the break. Next, Texas junior guard RJ Pair had 19 points, seven boards, five assists and the top plus/minus (22) on the team. Finally Soucie (Osawatomie, Kan.) made 6 of 8 shots to reach his point total while also having seven boards and four dimes. Jefferson and Rodriguez-Flores combined for 41 points, 13 rebounds, three assists, and two steals to lead the Eagles. Off the bench Sparks had 12 points and three assists. UNK faces two more RMAC teams, Colorado-Colorado Springs and No. 14 Colorado School of Mines, this weekend on the road.