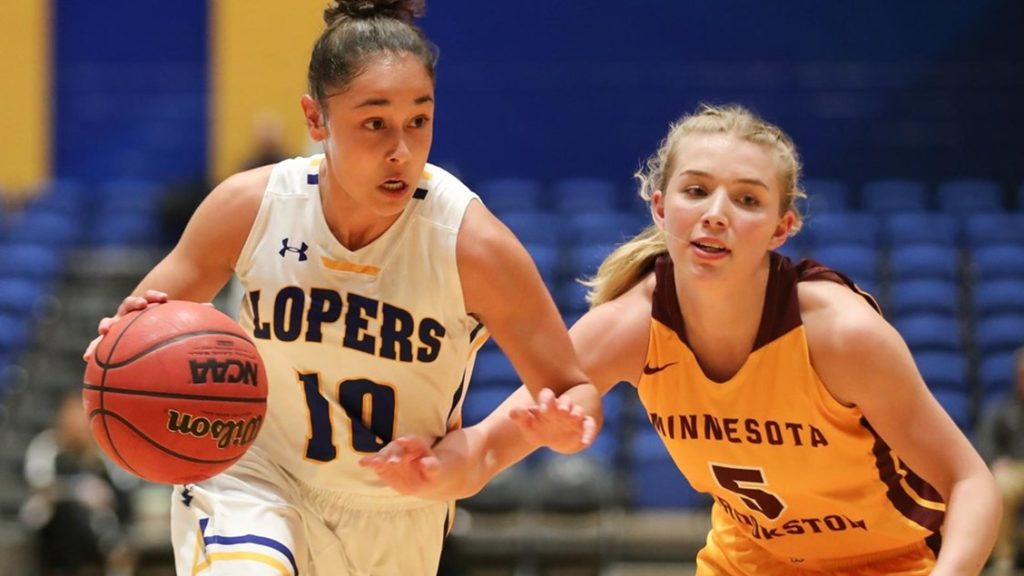 This was the season opener for both teams with the game part of the UNK Crossover Tournament. Wayne State edged Northwest Missouri State, 61-57, in the early contest.

Simental (Pueblo, Colo.) had quite the Loper debut as she went for 26 points, six assists, five rebounds, and two steals in almost 38 minutes of work. Making 10 of 17 shots (4 of 8 threes), she previously was at Division I Denver. Inside Carlson (Elkhorn South) tallied a career-high 22 points and grabbed nine rebounds (five offensive). She made 8 of 14 shots and went 6 of 6 at the line while also having three dimes and a block. Her previous top point total of 18 came in January at Southwest Baptist. “I thought we had some really, really good moments and then I thought we had a few lulls especially in the third quarter,” UNK head coach Carrie Eighmey said. “Credit to them. They came out and made some tough shots.”

Both teams got off to hot starts but UNK pulled away to lead 20-15 at the end of the first quarter and then outscored the Golden Eagles by 10 in the next 10 minutes to open up a seemingly comfortable 43-28 halftime lead. A 7-0 second quarter run was highlighted by a steal and then as fast break three from Wahoo sophomore guard Aspen Jansa.

However, UMC didn’t go quietly, hitting a series of tough buckets and shooting 69% (11 of 16) in the third quarter to not only hang around but also get the Loper lead down to two. The Eagles third triple of the quarter made it 55-53 after UNK had led by as many as 17 points.

“They were really aggressive and made some great shots and I thought maybe we relaxed defensively. We didn’t quite dictate things defensively as much as we had been in the first half,” Eighmey said.

It was a 65-64 Kearney lead with seven minutes remaining when Simental sunk a fast break jumper after South Dakota freshman Trinity Law recorded a steal. After another UMC turnover, Simental found Iowa freshman post Madison Dreckman for an easy layup and a 69-64 lead. The Golden Eagles didn’t get closer than four the rest of the night.

“I think its progress (keeping the lead). That can be attributed to freshmen being sophomores now, sophomores being juniors. We have a little bit more experience in having gone through those things,” Eighmey said. “We handled that situation a little bit better than we showed last year.”

While Crookston shot 51% from the field and had a plus five rebounding margin, UNK had a plus 15 turnover margin and went 15 of 18 at the line.

Besides Simental and Carlson, Jansa had 10 points in 18 minutes off the bench with five others between three and five points. That included Iowa sophomore wing Maegan Holt who had six boards, five points, and two assists. “From the point guard spot Haley is very vocal and she obviously can score it,” Eighmey said. “She’s hungry … with injuries she hasn’t been able to play. We had only five turnovers so I’d say she ran the team effectively.”