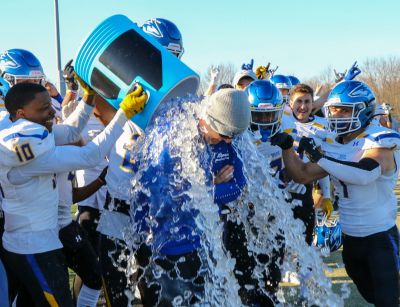 The Warriors (8-4), from the Northern Sun Intercollegiate Conference, came in with a veteran defense that was allowing just 16 points and 129 rushing yards per game. Head coach Josh Lynn’s option-based offense gashed Winona early and often and managed those 446 yards on just 48 carries (9.2 avg.). UNK rushed for six touchdowns with quarterback TJ Davis (Colorado Springs) going 4 of 6 in the air for 46 yards and one score.

Davis, having a hand in five TD’s in the first half, was named Offensive MVP with senior inside backer Sal Silvio (Kansas City) the Defensive MVP. Davis ran 12 times for 144 yards and four scores (54, 14, two, and 36 yards) with Silvio amassing nine tackles including his ninth sack of the fall. He ends a two-time all-region career with 323 tackles, second most in Loper lore.

The defense started the day with a three and out and then Davis, on the Lopers second offensive play, fooled the entire WSU defense and ran 54 yards down the right sidelines for a 6-0 lead. Lynn then called for a fake PAT and it worked as junior OLB Travis Holcomb (Centura) picked up the two points.

Another three and out followed and featured a 10-yard sack by Silvio who fell just short of the single season sack record (9.5/Nate Reicks/2008). A short punt and a 10-yard return by graduate student Luke Quinn (Scottsdale, Ariz.) put the ball deep into WSU territory. Two runs later and it was quickly 15-0.

Both teams also had TD’s wiped off the boards, UNK seeing a 39-yard run by senior back David Goodwin (Lauderhill, Fla.) called back due to holding. That would’ve made it 42-19 midway through the third quarter. A few minutes later WSU all-league punt returner/receiver Jake Balliu brought back a punt 70 yards for six points but an illegal block nullified that score. However, WSU did get a 33-yard pass from Burke to Tyler Knutson later on that drive to make it 36-26.

UNK responded as Goodwin ran for three tough yards to convert on 3rd & 2 and then senior back Darrius Webb (Allentown, Pa.) had runs of six, 19 and 23 yards, the third resulting in a TD. A 15-yard personal foul on WSU also aided that drive. All toll the teams combined for 11 penalties for 137 yards.

Winona came back once more as Burke completed passes of 30 and 38 yards before finding receiver Ethan Wittenburg from four yards out with 10 minutes to play. The back and forth continued as UNK used nine straight runs, including a 21-yard scamper by junior Dayton Sealey (Hastings), to salt things away. The 89-yard drive, which started with a penalty on the kick return, ended when Quinn – a six-year Loper – ran in from a yard out. That is his 21st and last score in a UNK uniform.

​Backup QB John Rumpza tried to get WSU within 10 points again as he threw a 26-yard completion on 4th & 19 from the Loper 37-yard line. However, the defense finished the year in style by shutting down the Warriors on four plays from inside the five-yard line.

For UNK, Webb had a big second half and tallied a team-best 152 rushing yards on 12 carries. Goodwin managed 79 yards on 16 carries and thus went over 1,000 yards (1,041) for the season, as did Davis (1,030). This is the first time in school history two players have reached 1k in rushing yards in the same fall. The four rushing scores by Davis are tied for second most in school history in a game and just one off the record.

For Winona, twelve different players caught a pass including five by Balliu. Backup back Miguel Benjamin had 49 yards on 10 carries with redshirt freshman backer Clay Schueffner having a team-best 10 tackles. UNK begins spring ball in March 2020 with signing day coming in February.