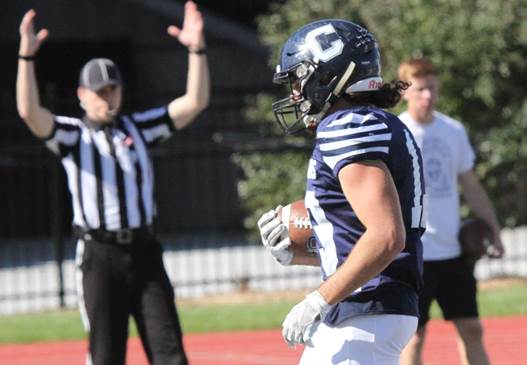 SEWARD, Neb. – A Concordia defense that tightened in the red zone and got two interceptions from safety Peyton Mitchell gave life to Saturday (Oct. 19)’s upset bid. However, quarterback Tyson Kooima and sixth-ranked Northwestern did enough to escape sunny Bulldog Stadium with a 20-14 victory. The Red Raiders outgained the Bulldogs, 412-357.

No matter the opponent, head coach Patrick Daberkow’s squad keeps finding itself in wire-to-wire contests. Six of seven games have been decided by margins of a touchdown or less for Concordia (3-4, 3-3 GPAC).

“This was a tough one to swallow,” Daberkow said. “We’re very tired of being close but not quite there. I really wanted this for our seniors and they wanted it for each other. Any time you lose by six to a top 10 team there’s a lot of things where you can think about this play or that play. You have to make those plays. We need to take the next step.”

Northwestern head coach Matt McCarty lauded the physicality of the Bulldog defense in his postgame comments. Concordia forced three more turnovers and held the Red Raiders out of the end zone on three of their five trips inside the red zone. Linebacker Lane Napier and company hung tight while watching Braxton Williams connect on field goals of 26 and 27 yards for the only Northwestern points of the second half.

Trailing 20-7 in the final minutes, the Bulldogs put together their longest drive of the day. They went 79 yards on five plays in a series capped by Jake Kemp’s 28-yard touchdown pass to Lane Castaneda. The ensuing onside kick was recovered by the Red Raiders (6-0, 5-0 GPAC), who proceeded to milk the remaining clock with three kneel downs.

Concordia missed out on some of its own opportunities in plus territory. Northwestern running back Jacob Kalgonis coughed up the football on the first Red Raider possession of the game. The Bulldogs recovered on the Northwestern 42 but then went three-and-out. Kemp also was sacked and lost a fumble later in the first quarter with Concordia in the red zone. In addition, it missed on a 35-yard field goal try in the third quarter.

The Bulldogs had to capitalize on those chances for them to pull the upset. Concordia did a commendable job containing Kooima, who adeptly extended plays with his feet but had -6 rushing yards. He completed 23-of-39 passes for 287 yards and a touchdown. He hooked up often with his favorite target in Shane Solberg, who grabbed 10 receptions for 179 yards.

Kemp and the passing game are proving they can be effective even when up against elite opponents. The signal caller from Decatur, Texas, went 29-for-41 for 316 yards and a touchdown pass. The Bulldogs were able to open up some running lanes early in the game for Ryan Durdon, who put up the day’s first points on a 14-yard touchdown run. Durdon ran 11 times for 53 yards and caught five passes for 35 yards. Kemp was also able to efficiently spread the ball to his receivers in Castaneda (six catches, 89 yards), Art Anderson (six catches, 58 yards) and Korrell Koehlmoos (five catches, 81 yards).

“We wanted to limit the amount of times they had the ball,” Daberkow said. “So you saw us huddling for the first time this season today. I think that helped keep us in the game. (Kooima) is a special quarterback. We really liked the game plan. We liked what we had going today. We just didn’t quite make enough plays.”

Tanner Machacek was a menace for the Northwestern defense. He piled up 13 tackles, four tackles for loss, three sacks, three quarterback hurries, two forced fumbles and a fumble recovery. On the other side, Concordia got a team high 11 stops from linebacker Derek Tachovsky. Napier added nine tackles (two for loss) and a forced fumble. Linebacker Riley Bilstein notched seven tackles and recovered the ball that Napier knocked loose.

Seven games in, it’s not hard to think about what could have been this season for the Bulldogs. They have dropped tight games by scores of 17-10 to Doane, 27-24 to Buena Vista University, 13-10 (four overtimes) to Jamestown and now 20-14 to Northwestern. Said Daberkow, “We are so close. We’ve got to keep fighting. It’s tough, but that’s life.”

After two weeks at home, the Bulldogs will be headed to Sioux Center, Iowa, next Saturday (Oct. 26) to take on Dordt (4-3, 3-2 GPAC). Kickoff is set for 1 p.m. CT. This will mark the fifth year in a row that Concordia has played at Dordt. Last season’s meeting resulted in a 38-19 Defender win.