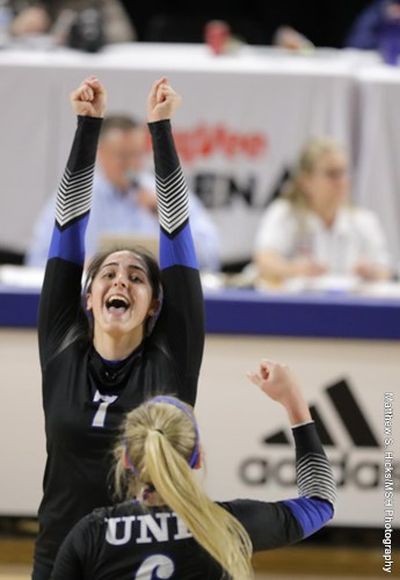 Kearney, Neb. – The second-ranked Nebraska-Kearney volleyball team got 19 kills and 31 digs from senior outside Julianne Jackson and was strong late in the first and fourth sets to down 20th-ranked Northwest Missouri State (-24, -10, 23-25, -21) Friday night in an MIAA Tournament semifinal match in Kansas City.

The top-seeded Lopers (32-0) advance to Saturday’s title match at 6 p.m. where they’ll face No. 10 Central Missouri (23-8). The third-seeded Jennies downed No. 3 and second seeded Washburn Jennies in a grueling five-set match to advance.

Beating Northwest for the third time this year, UNK scored the first five points of the night but faced set point as the ‘Cats rallied from that hole as well as deficits of 12-7, 17-13 and 20-18. However, a kill by Jackson (Bonner Springs, Kan.) tied things up and then an unforced NW error put the Lopers at set point. UNK took advantage of that mistake as junior setter Madison Squiers (Kearney Catholic) recorded one of her season-high nine kills to make it 1-0 on the scoreboard.

Northwest, looking for its first win over the Lopers since 1984, didn’t got away. They jumped to a 9-5 lead in the third set and led the rest of the way, moving ahead each time the Lopers tied things (14, 15, 19 and at 21). Both teams had 12 kills in this set with UNK having 10 of its 19 errors here, five of the unforced variety.

UNK broke a 6-6 tie in the third with a short spurt of 3-1 and didn’t trail again. This final key stretch kills by Squiers and Jackson as well as an ace from junior right side Mary Katherine Wolfe (Omaha Marian). The Lopers built up lead of 15-10 and 18-14 before NW got within one at 20-19. However back-to-back ‘Cat attack errors sealed the Green & White’s fate.

The MIAA Co-Player of the Year, Jackson reached her match-high kills in 57 swings (.263 pct.) and also managed a season-high 31 digs. She previously had 19 kills last Saturday in a five-set win over Pittsburg State with her dig total two shy of her career best effort (vs. Central Oklahoma, 9/21/18; 3-2 win).

Northwest had three players with a double digit kill total, including Morgan Lewis (14), with libero Hannah Koechi at 42 digs