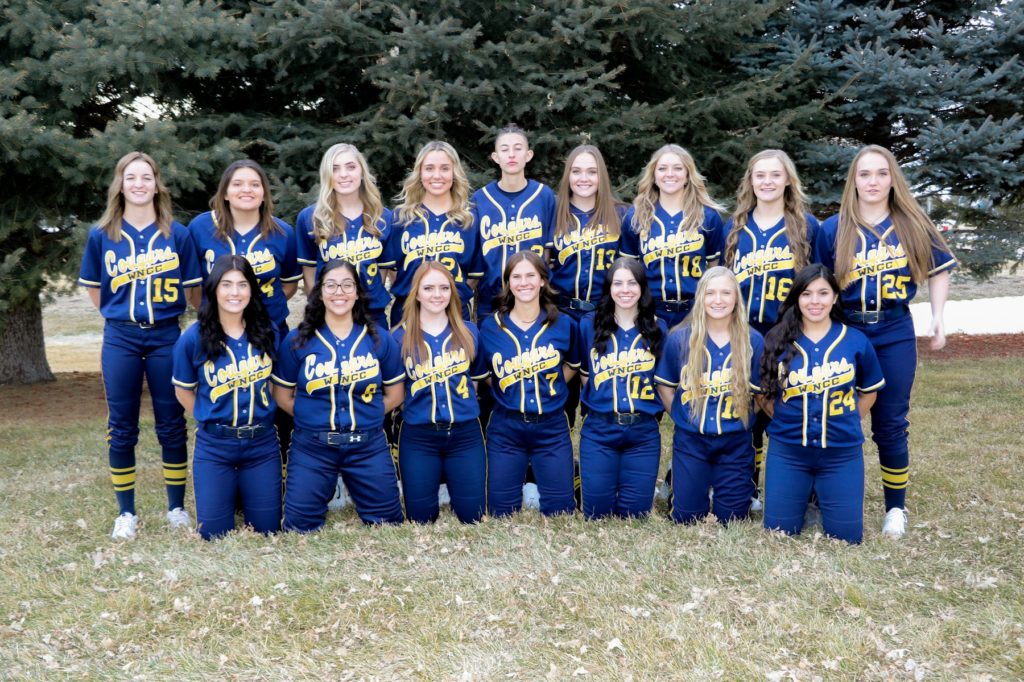 The Western Nebraska Community College softball team had a week delay in its season opener, but things look good for the Cougar softball team to open the season Feb. 13 at Clarendon College.

The Cougars will spend a week in Texas playing games beginning with Clarendon. After that, the team will have a have a Valentine’s Day contest at Odessa College followed by Midland College on Feb. 15, Howard College on Feb. 17, and Western Texas on Feb. 19.

WNCC freshman pitcher Lexi Parker said the team is ready to open the season in Texas.

“We are way excited to play in Texas,” Parker said. “We are ready to get out on the field and go.”

After having the first week to Texas snowed out last week, the team is really anxious to get on the field to put together what they have been working on all winter.

The Texas trip won’t be easy by any means of the imagination. The Cougars will face No. 12 Howard on Feb. 15, but also Texas teams that have already played six or more games.

Parker said the focus of the Texas trip is to mesh together and take one game at a time.

“We are ready,” Parker said. “It has been a long but fun winter. We are just ready to go out and do what we are here to do that we love.”

This year’s team has meshed together nicely and have been grinding away with practices. Parker said they want to get out and play.

“We just want to go out there and do the best we can,” Parker said. “We want to go out and get some wins. We are just ready to get out on the field and put together what we have been practicing all winter.”

Parker said there is a nice blend of sophomores and freshmen that makes up the talented team.

WNCC returns six players from last year’s Region IX team and all six had a hand in the regional title.

The Cougars also have the twins from American Fork, Utah, back this year in Tylar and Sam.

The other one back is returning pitcher and outfielder Emma Glawson, of Victoria, British Columbia. Glawson will be one of the two main pitchers for the team along with Parker, who hails from Draper, Utah.

The sophomores had good seasons as a freshman. Allie played in 51 games as a second baseman and finished with a .266 batting average with 10 RBIs and 31 runs scored.

Her twin sister, Tylar, appeared in 50 games as a right fielder. She had a .233 batting average with 18 RBIs and 21 runs scored.

Glawson had one of the best seasons of the returners a year ago offensively and defensively. Offensively, Glawson appeared in 51 games and finished with a .459 batting average with nine home runs, 39 RBIs, and 33 runs scored. She also had 18 doubles with six stolen bases.

Defensively, Glawson finished with a 7-5 record with 58.1 innings pitched. She started 16 games and struck out 27 and walked just nine, finishing with a 3.24 ERA.

The freshmen have plenty of talent. Besides Parker, the newcomers come from Colorado, Utah, and Texas.

The Texas players include Serena Olivas of El Paso and Ashley Alcozer of Temple.

The freshmen from Colorado include Mackenzie Bakel of Thornton, and Jade Gomez of Wheatridge.

The biggest share of freshmen hail from Utah. They include Maizie Clark of Grantsville; Tylor Comeau of Layton; Taylee Braegger of Cedar City; Bailey Nay of Ogden; and Cortney Rhees of West Haven.

The team will be on the road for much of February and March. But, the Cougars will have eight of nine home games from March 28 through April 27. The only road trip is an April 7 trip to Sterling, Colorado. All the other games during that month are at Volunteer Field.

The team knows what their goal is, another regional title and hopefully a berth at the national tournament. It won’t be easy, either and the players realize that.

“We definitely have a target on our backs but all of us are ready to go,” Parker said.

It is a long process, but the team is taking it just one game at a time and continuing to get better each game they step foot on the diamond.

“We are all just going to come together,” Parker said. “I mean, for the pitchers and catchers, we have work to do and we definitely have to work as a team and go one game at a time.”

(Note: Schedule could change depending on weather)