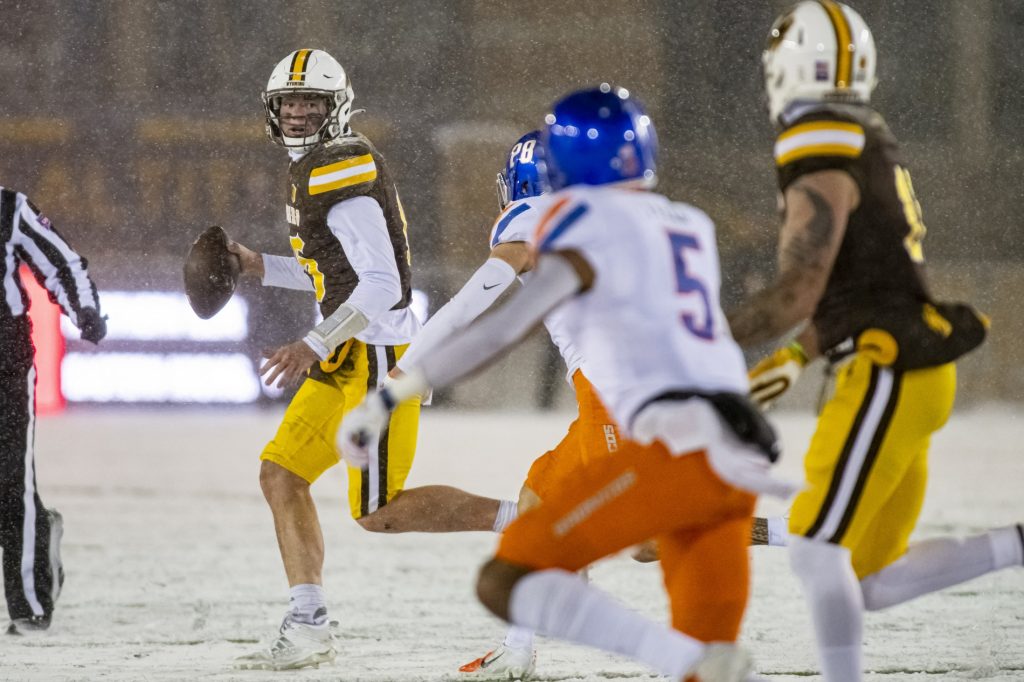 Laramie, Wyo. (Dec. 12, 2020) – It was only the second home game of the year for the Wyoming Cowboys on Saturday, but it was also the season finale in a shortened season that was unlike any in Wyoming history. The Cowboy defense was outstanding on the night, but the Boise State Broncos were able to come up with enough to capture a 17-9 road win over the Pokes.

Wyoming ended the year with a 2-4 overall record and a 2-4 mark in the Mountain West. Boise State improved to 5-1 overall and 5-0 in the MW.

On the night, Wyoming was able to slow down the Bronco rushing attack, allowing only 111 rushing yards and coming up with 7.0 tackles for loss for a -21 yards. But the Boise State defense was just as effective in limiting Wyoming’s rushing game, giving up only 82 rushing yards to the Cowboys.

There wasn’t much success for either team thru the air on a night that saw it snow throughout the game in Wyoming’s War Memorial Stadium. The Broncos completed 19 of 29 passes for 181 yards, one TD and one interception. The Cowboys completed only 4 of 21 passes for 64 yards and threw one interception. Boise State ended the night with 292 yards of total offense to Wyoming’s 146.

Wyoming’s nine points on the day came on three field goals from outstanding freshman place-kicker John Hoyland. The true freshman from Broomfield, Colo., gave Wyoming an early lead with a 42-yard field goal in the first quarter to put UW up 3-0. The 42-yarder tied a career best for Hoyland. He added a 36-yarder in the third quarter and another 36-yarder in the fourth quarter. Hoyland entered Saturday’s game leading the nation in field goals made per game, averaging 2.00. He ended the 2020 season making 13 of the 14 (92.9 percent) field goals he attempted.

Boise State’s 17 points came on a four-yard touchdown pass from quarterback Hank Bachmeier to running back George Holani in the first quarter, a 34-yard field goal in the second quarter by place-kicker Jonah Dalmas and a third quarter TD run from two yards out by running back Andrew Van Buren.

The Cowboy defense was led by redshirt freshman linebacker Easton Gibbs, who had a team high 13 tackles, including 1.0 tackle for loss in his first career start for Wyoming. Junior linebacker Chad Muma also had 13 tackles on the night, marking the fifth game in six total games this season that he recorded double figures in tackles.

“We had opportunities to beat a good football team. We got it to within a one-score football game, but we certainly could do better. I thought our guys competed hard,” said Wyoming head coach Craig Bohl. “Typically when you have a snow-covered football field — that is an advantage to Wyoming, but we just couldn’t make enough plays to get the job done. They’re (Boise State) a good football team. We needed to play better, but I thought the effort from our players was good.

Asked about the Cowboy offense, particularly the passing game, Bohl said, “We have several months to get ready for next season. We’re going to have to do a significant evaluation, but when you’re down to your third-string quarterback and your second-string quarterback that is going to have an impact, however we’ve got to improve. There are several things we can do better at, but that (the passing game) is certainly one of them.”

Bohl was also asked to comment about the strong play of the Wyoming defense, keeping UW in the game until the end. “I thought our guys really did well because I think Boise State is arguably the best offense in the conference and they’ve got a lot of weapons,” said Bohl. “I thought our defensive guys really competed. They got the ball back time and time again to our offense. Sometimes they were put in really, really tough situations like after a blocked punt, so we’re going to build on that. But there are things we can certainly do better.”

In terms of the year in general, Bohl was asked how odd this year was. He responded by saying, “I will make myself available to do an interview with all of you about the season overall early next week. I’m not really prepared to do that right after this game, but I am going to reiterate that we had a plan and protocols in place to allow us to play every week. I told our conference commissioner (Mountain West Commissioner Craig Thompson) that one thing you can count on is the University of Wyoming is going to honor our commitment and show up every game — even if we had to juggle personnel. Every time that we had a chance to play, we answered the bell. That is a credit first to our administration, that had a plan and put resources in place to allow us to play and it is also a major credit to our players, who made good decisions throughout the year to allow us to play, so I don’t want to minimize that. We’ll learn from this. It was the most trying year I’ve ever had as a coach.”

Wyoming came up with the first big play of the game when junior cornerback C.J. Coldon intercepted Boise State quarterback Hank Bachmeier on the second play of the game at the Boise State 35-yard line and returned it one yard to the 34. It was Coldon’s second interception of the season and second of his career.

Cowboy running back Smith would gain 10 yards on first down. Wyoming quarterback Levi Williams would find Smith for a completion of four yards on the second play of the drive down to the Boise State 20, but after a false start penalty by the Pokes and a couple runs for no gain Wyoming would line up for a field goal. True freshman place-kicker Hoylan came in and converted the field goal from 42-yards out, tying his career long. Wyoming took a 3-0 lead with 11:03 remaining in the first quarter.

Boise State would respond on its following drive, taking the ball 75 yards in 12 plays concluding with a four-yard touchdown pass from quarterback Hank Bachmeier to running back George Holani to give the Broncos a 7-3 lead with 4:41 remaining in the quarter. Wyoming would have one more possession in the quarter, but the period would end with the score 7-3 in favor of Boise State.

The teams would exchange punts to start the second quarter. Following the Cowboys’ second punt of the quarter, UW was called for interfering with the opportunity for the punt returner to catch the ball, which placed the ball at the Boise State 38. The Cowboys later had a 15-yard personal foul penalty, but despite that the defense was able to hold the Broncos to a 34-yard field goal that extended the Broncos lead to 10-3.

On Wyoming’s third punt of the quarter, the Broncos blocked the punt and it looked as if they had returned it for a touchdown, but a block in the back by Boise State put the ball back at the Wyoming 20-yard line. It was then that the Cowboy defense came up big forcing the Broncos into a negative six yards on the drive. Boise State was forced to settle for a 34-yard field-goal attempt, but after a bobbled snap Cowboy safety Esaias Gandy tackled holder Connor Riddle for an eight-yard loss and coming away not allowing any points to the Broncos.

After a couple more punts between the teams, Boise State would have the ball at its own 49-yard line with 53 seconds remaining in the half. The Broncos would complete a pass of 10 yards, followed by a run of six and another completion of 10 yards, moving the ball to the Wyoming 25-yard line. Boise State QB Bachmeier would then find wide receiver Khalil Shakir over the middle for 23 yards down to the Wyoming two-yard line. The Broncos tried one more throw to the corner of the end zone,but the pass went incomplete and with no timeouts remaining time expired in the first half. The first half ended with the Broncos holding a 10-3 lead.

The third quarter would see Hoyland convert a 36-yard field goal to pull the Cowboys to within four points at 10-6. Late in the third quarter, Boise State would add its second touchdown on a two-yard run by Van Buren to take a 17-6 lead into the fourth quarter.

Wyoming’s defense shutout the Broncos in the fourth quarter, but Wyoming was able to generate only three more points of its own on a second 36-yard field goal from Hoyland to make the final score 17-9 in favor of the Broncos.

For the Cowboys it was the final game of the season. Boise State will play San Jose State next Saturday in the 2020 Mountain West Championship Game.