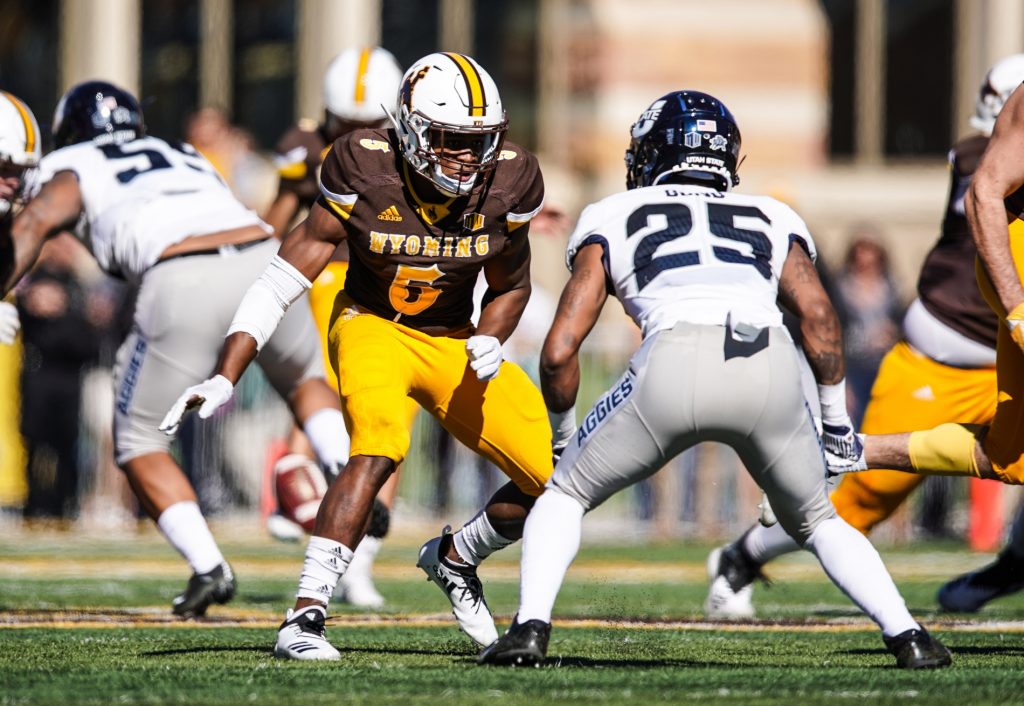 Laramie, Wyo. (Nov. 16, 2020) – The Wyoming Cowboys will return to Jonah Field at War Memorial Stadium on Thursday night to host one of their oldest rivals in the Utah State Aggies. The game is scheduled to kick off at 7 p.m., Mountain Time and will be the 71st meeting between the two schools. The game will be broadcast on radio over the 25 affiliate stations of the Cowboy Sports Network, beginning with the pregame show at 5:30 p.m., M.T. CBS Sports Network will be televising the game live nationally.

Wyoming (1-2 on the season) had an unexpected week off last week when its home game scheduled for Saturday, Nov. 14 versus Air Force was cancelled due to increased COVID-19 numbers at the Air Force Academy and within the Air Force football program. Utah State (0-4 for the 2020 season) lost at home last Saturday to Fresno State by a score of 16-35.

The Cowboys enter this week’s game looking to continue the home success they have enjoyed since the beginning of the 2016 season. Over the past five seasons, the Pokes have posted a 21-6 (.778) home record. Beginning with the last two home games of the 2018 season, Wyoming has won its last nine consecutive home games, which ties UW for the nation’s 10th longest home winning streak.

A number of Wyoming Cowboys are ranked among the nation’s leaders this season. Junior running back Xazavian Valladay ranks No. 6 in the nation in rushing yards this season, averaging 132.3 yards per game, and he ranks No. 15 in all-purpose yards (rushing+receiving yards), averaging 157.67 per game.

Junior middle linebacker Chad Muma is among the nation’s top tacklers, ranking No. 5 in total tackles per game (12.7). Muma also ranks 23rd in the country in solo tackles for the 2020 season, averaging 5.7 per game.

True freshman place-kicker John Hoyland leads the Mountain West and ranks No. 2 nationally in field goals made per game, successfully converting an average 2.00 field goals per game. He also ranks No. 22 in the NCAA in field-goal percentage (85.7 percent).

Another Cowboy freshman, redshirt freshman wide receiver Isaiah Neyor, is averaging 29.83 yards per reception this season to lead the Mountain West and rank No. 2 in the nation.

Redshirt freshman quarterback Levi Williams is among the nation’s top passers in terms of passing yards per completion as he averages 15.0 yards per pass completion to rank No. 1 in the MW and No. 13 among all FBS players.

Since the Cowboys last played at home, running back Xazavian Valladay reached a career milestone that few have accomplished in UW football history. He became only the 12th Cowboy in history to rush for 2,000 career yards. Valladay ran for 147 yards at Colorado State on Nov. 5 to improve his career total to 2,071 rushing yards.

About the Wyoming-Utah State Rivalry

Wyoming and Utah State first played in football in 1903, and this year’s meeting will be the 71st in the series. Wyoming has won 26 of the previous 70 meetings, while Utah State has won 40 times and there have been four ties.

A new tradition was incorporated into a century-old rivalry in 2013 when the Wyoming Cowboys and Utah State Aggies introduced a new “Bridger’s Battle” tradition to the football series between the two schools. As part of the new tradition, a traveling “Bridger Rifle” is awarded to the winner each year. The rifle is a .50-caliber Rocky Mountain Hawken rifle that was popular among mountain men of the 1800s, and is widely-considered to be the rifle carried by the legendary Jim Bridger. “Bridger’s Battle” was chosen as the name for the new series due to Bridger’s ties to the Wyoming-Utah region. The Bridger’s Battle portion of the series now stands at 5-2 in favor of Utah State.

The Aggie defense is led by linebacker AJ Vongphachanh with 33 tackles. He is also tied for the team lead with 2.0 sacks and has one forced fumble for the season. Defensive back Shaq Bond has 30 tackles for the season. He also leads the team with one interception and has three pass breakups.

Kicker Connor Coles is 1 for 1 on the season, with a long of 38 yards. Punter Stephen Kostanlee has punted 32 times averaging 40.3 yards per punt.