Sugar beets should be getting ready to go into the ground next month in March in western Nebraska and eastern Wyoming, but growers could face some challenges with funding.

In October 2019 the sugar beet crop suffered damaging freezes at the beginning of harvest, which is still affecting growers as Western Sugar Factory is still running the beets and no one yet knows where growers will stand with payments.

To assist the growers U.S. Senator Deb Fischer and seven colleagues including Senator Ben Sasse have sent a letter to the U.S. Department of Agriculture Secretary Sonny Perdue to take immediate action in implementing the FY20 Appropriations bill which includes the Wildfire, Hurricane, and Indemnity Program Plus program, WHIP+.

“The past two years have been devastating for Cooperative farmers working in Colorado, Montana, Nebraska, and Wyoming due to significant weather events,” Fischer said. “It’s really essential that these farmers are able to obtain their operating loans.”

Fischer and her colleagues are not alone in trying to assist the growers.

Kendall Busch president of the Nebraska Sugarbeet Growers Association said there are several organizations working on the issue, but it will take time.

“Hopefully, in the next week or two, we’ll have an update, but it’s a tough process to get through just to make sure things are working right,” he said. “FSA, RMA, our processors, CEOs, CFOs, have all been working very hard on this, and hopefully we’ll have an answer in a couple of weeks.”

The frozen beets are hard to process since they came into the piles frozen and the purities haven’t been the best, making them harder to refine.

The bipartisan letter was led by U.S. Senators Cory Gardner, and Michael Bennet of Colorado, and also signed by Senators Mike Enzi and John Barrasso of Wyoming, and Steve Daines, and Jon Tester of Montana.

U.S. Nebraska Senator Deb Fischer, a member of the Senate Agriculture Committee, announced on Feb. 4, the Bureau of Reclamation (BoR) will provide in its Fiscal Year 2020 spending plan, $2.3 million to be put toward the repairs of the Gering-Fort Laramie tunnel following the collapse of the canal containing the tunnel in the summer of 2019.

“This canal is critical to Nebraska agriculture, supplying surface water to approximately 55,000 acres of cropland including corn, sugarbeets, and dry edible beans,” Fischer said. “This funding will help western Nebraska farmers and families who feed the world to recover from the effects of this major disruption to irrigation.”

Previously the BoR indicated that precedent made them unable to offer any funding for the canal’s repair. Senator Fischer and her staff worked closely with the Bureau to find a way forward and secure this funding, which is part of what is needed for the full repair.

The BoR’s Fiscal Year 2020 spending plan, which was just released, includes $2.3 million to repair Tunnel 3 on the Gering-Fort Laramie canal, which partially collapsed on July 17, 2019, damaging all three of its tunnels. 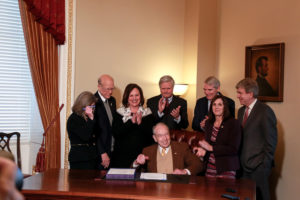 I just want to thank Chairman Grassley.  He has been very tenacious on getting this agreement done.

And the other guy who has been tenacious for a number of years is Chairman Roberts.

To have them both chair these important committees and be able to continue to advocate for trade agreements, which are so important for our states, has been tremendous.

Thanks to the president for sticking with this, for keeping his words.

And thank you to Ambassador Lighthizer, because he really pushed on this as well and was able to get it across the finish line.

This is a remarkable achievement—to be able to have a bipartisan trade agreement that passed overwhelmingly in the United States Senate.

Agriculture is the economic engine of my state, of Nebraska.

One in four jobs are directly related to production agriculture.

54,000 jobs are related in Nebraska to exports.

$13.8 billion in economic activity from my state is related to agriculture.

To be able to have these kind of agreements, whether it is USMCA or a trade agreement with China or a great agreement now with Japan that we have and now we are looking over into the UK and the EU, and really all across the globe, in order to find more customers for the great products that we produce.

Whether it’s in ag, manufacturing, or small businesses, families and communities across Nebraska are going to benefit from all of these trade agreements.

I’m just really proud of the work we have been able to do in working together with the administration and with my great colleagues here in the United States Senate in order to get these agreements done, and especially the USMCA, with our top two trading partners, Mexico and Canada.

“Nebraska’s families, ag producers, and manufacturers depend on access to Canada and Mexico, our state’s two largest export markets. I am happy that Congress got this deal done and look forward to President Trump signing it, securing great opportunities for Nebraska.”