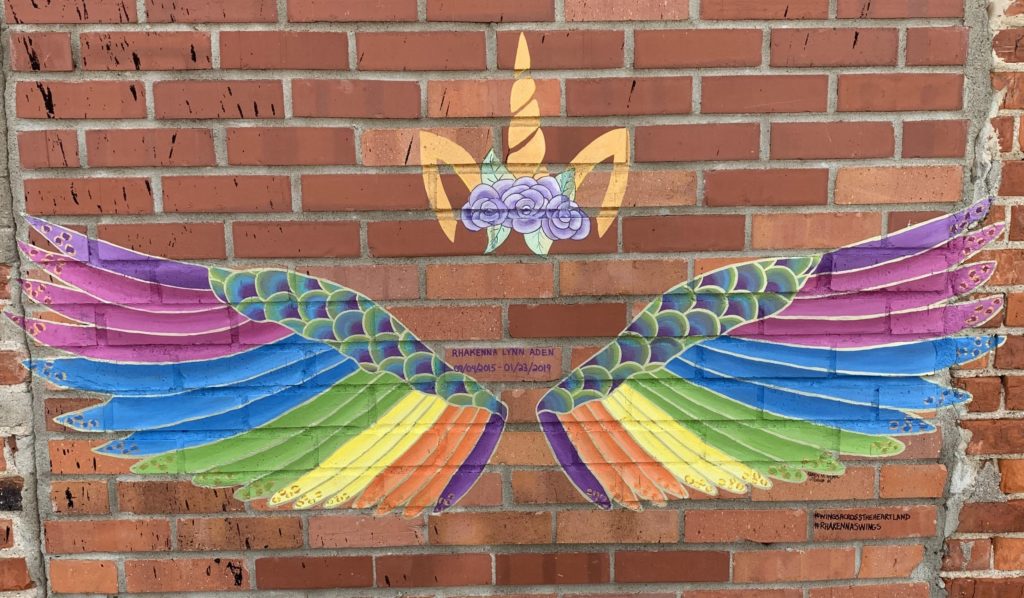 Rhakenna's Wings are placed around the community of Cozad. Painted by Karen Neppl, a Nebraska Artist who began the interactive project "Wings Across the Heartland".

COZAD, NE – After the loss of a three-year-old in Cozad, the Aden Family reaches out to the community with Rhakenna’s Wings.

Rhakenna Aden, the three-year-old daughter of Tasia and Jamion Aden, passed away on January 23, 2019 due to a seizure disorder. She was born on September 4, 2015 and is described by her family as being, “a spicy, three-year-old.” Who was, “spunky and outgoing.”

After her passing, Rhakenna’s family decided to place wings in Cozad for not only her legacy, but also to share love across the community.

Wings have been placed in a downtown alley in the business district, a set is on the east side of the Cozad Fire Station, at the Cozad City Pool, as well as on the garage doors of the Cozad Health System’s emergency entrance.

The wings were painted by Nebraska Artist Karen Neppl, from Grand Island. Neppl started the “Wings Across the Heartland” project in Grand Island and looks to spread it out to other communities like Cozad.

The history behind the wings in Cozad  is a special symbolism for the Aden family shortly after Rhakenna was born. Tasia gives background information on why wings were chosen to symbolize her daughter.

The wings project has now taken its place in the community of Cozad in cooperation with “Wings Across the Heartland” and continues on as others can sponsor a set of wings for any loved ones or for Rhakenna herself in Cozad.

One special twist, the wings which have”#Rhakenna’s Wings” on them, they will also have a disguised leopard print to give the same spark Rhakenna had. One thing Tasia and her family want to remind the community is the wings are not just about Rhakenna:

Once all the wings are finished, there will be a total of 20 wings.